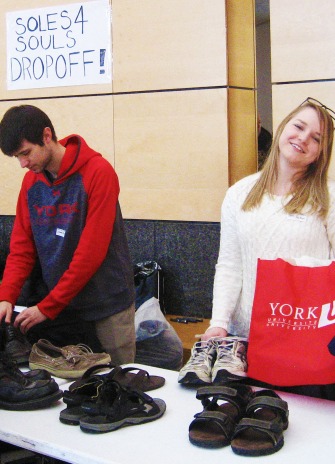 One man literally took the coat off his back to give to the Used Shoes and Coats Drive held last week at York University. Organizer of the drive, Kalpana Bilimoria, told the story of an older gentleman who stopped by initially with just one pair of boots. After his donation, he paused. “Here. Take this also.”

To the surprise of organizers, the man removed the coat he was wearing and placed it on the pile. Bilimoria’s husband who was assisting in the event asked him how he would manage outside with temperatures nearing -25 that day. Emptying the pockets of his coat, the man shrugged. “I’ll be fine,” he responded, and walked away.

Numerous bags were filled to the brim as people stopped by Vari Hall at York’s Keele campus to donate and give their coats and shoes to the less fortunate. As part of the social science course, “Prospects and Perils in the 21st Century,” taught by Professor Walter Perchal, students were guided to initiate their own “Change Project”. A Change project could be any initiative by an individual or group who steps out of their comfort zones to accomplish something that will bring about a positive impact on an individual or community.

Organizers from the Used Shoes and Coats Drive received gloves, mittens, winter slippers, scarves, blankets, and a wide variety of ladies, men’s and youth coats and jackets; some of them made of quality material such as leather and cotton. “Response from both staff and students was outstanding! It was truly a team effort that made it possible,” said Bilimoria. “It’s what we can do for the community.” The items received exceeded initial expectations, with a couple of brand new shoes donated that were still in the box.

Several uplifting stories surrounded the student volunteers that day. Later in the afternoon, a woman approached the clothing drive with a beautiful little girl’s jacket in hand. She confessed it was her daughter’s favorite, but brought it so that it would get a “second life” with someone else loving it as her daughter did. “I saw true spirit of Canadians, so compassionate and willing to share,” Bilimoria said.

These contributions were divided three ways, the street petrol team led by Gautam Bhai affiliated with The Sri Sathya Sai Baba Centre of Toronto will distribute to the homeless in downtown Toronto and women’s shelters, and Soles4Souls organization, which is a not-for-profit global foundation dedicated to eradicating poverty.

The Used Coats and Shoes drive had no budget and was voluntarily produced by students, along with support from colleagues, friends and Campus Services and Business Operations. Although not an annual event, Bilimoria hopes