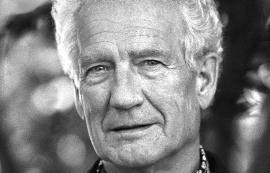 York Dance Professor Emeritus Grant Strate, the founder of York’s Dance Department,  died Feb. 9 at his home in Vancouver, BC,  following a short battle with cancer. He was 87 years old.

Widely considered the father of dance in Canada, Professor Strate was a compelling performer, a distinguished choreographer, a demanding yet kindly teacher, an effective advocate for the arts, a visionary university administrator, and a deeply loved ambassador for dance throughout the world

Prof. Strate, a charter member and the first resident choreographer of the National Ballet of Canada, left the company in 1970 to establish the Dance Department at York University. Known nationally for the strength and excellence of its teachers and programs, the department has nurtured many notable dance professionals, including Patricia Fraser (BA ’75), Denise Fujiwara (BFA ’79), Christopher House (BFA ’79) and most of Dancemakers’ initial members.

During his tenure at York, Prof. Strate continued his involvement in the larger dance community and his advocacy for the development of the art of dance and dance education in Canada. He chaired the board of directors of Dancemakers during the company’s formative years. As founding chair of the Dance in Canada Association, he organized the first National Dance Education Conference in 1973 at York University. He brought together choreographers, composers, dancers and musicians in mentored creative ‘hothouses’ through a series of national choreographic seminars. The first one was held at York University, followed by seminars at the Banff Centre for the Arts and Simon Fraser University. (To learn more about his legacy and impact, York Dance Professor Carol Anderson has written an appreciation that appears in Dance Connection Dance.)

A prolific choreographer, Prof. Strate created more than 50 ballets for dance companies in Canada and internationally. He guest-taught across North America and Europe, including at New York’s Juilliard School and the Laban Centre in London. Since first travelling to the Beijing Dance Academy in 1986, he returned to China several times to teach, choreograph and serve as a consultant.

Following his retirement from the SFU Summer Institute in 1994, Prof. Strate continued to contribute to the advancement of dance of all kinds, in all areas of the world, as president of the World Dance Alliance-Americas.

The respect that Prof. Strate commanded in the dance world is evident in the many honours he received, some of which include the Chalmers Award for Creativity in Dance, the Governor General’s Performing Arts Award, the Canada Council’s Jacqueline Lemieux Prize and the Order of Canada.

He was also the recipient of the Lifetime Achievement Award, and joined a distinguished company of laureates including: William F. Christensen, a recognized pioneer in the world of dance and co-founder of the San Francisco Ballet Company (2000); Violette Verdy, one of the premier ballet dancers of the 20th century who dedicated her post-performance life to training future generations of dancers (2001); George Zoritch, a former member of the Ballets Russes who danced in 18 film musicals and taught for 14 years at the University of Arizona (2002); Francoise Martinet, former principal dancer with the Joffrey Ballet and the New York City Opera Ballet, and an internationally acclaimed teacher and adjudicator (2003); and Miguel Terekhov, principal dancer and regisseur of the Ballet Russe de Monte Carlo, who developed a ballet curriculum at the University of Oklahoma and founded the Oklahoma Festival Ballet (2004).

After the death in 1999 of his partner, former National Ballet star Earl Kraul, Prof. Strate shared his home with one of his most successful protégées, Chinese-born choreographer Wen Wei Wang, who was with Prof. Strate when he died.