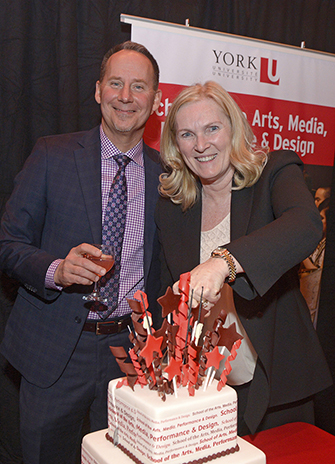 William Shakespeare once asked, “What’s in a name?” In the case of renaming York University’s Faculty of Fine Arts to the School of the Arts, Media, Performance & Design, a lot.

On Tuesday, Feb. 11 during a high-energy event held on the University’s Keele campus, the Faculty of Fine Arts officially became the new School of the Arts, Media, Performance & Design or AMPD for short.

“Our School of the Arts, Media, Performance & Design is among the largest of its kind in North America,” said York President and Vice-Chancellor Mamdouh Shoukri in his remarks to the standing room-only crowd gathered for the event. “Supported by its dedicated faculty and staff, talented students, generous alumni and friends, the school is enjoying a renaissance as a cornerstone of the York experience.”

The new name, said Shoukri, not only builds on the school’s history and reputation for excellence in the fundamentals, but also on its leadership in pioneering collaborative and innovative research at the intersection of arts and technology with engineering, science and the humanities.

Shoukri pointed out that the Government of Ontario has recognized the importance of creativity and innovation as key factors in tangible social and economic development. “The province has been working with universities, including York, to develop an educational mandate that drives creativity, innovation and knowledge,” he said.

AMPD is poised to take up the challenge of supporting this creative economy, said Shoukri, noting that the school will meet the needs of the global economy by developing institutional collaborations between art and technology, and encouraging a culture of entrepreneurship and innovation.

“Since my arrival [in 2013], this name change has been a top priority for us as we needed a better way to capture the complexity, scope, scale and interdisciplinary daring of our students, alumni, faculty and staff,” said AMPD Dean Shawn Brixey. “We needed a new name to more accurately and transparently represent our areas of strength in research, practice and engagement across the arts, media, performance and design.”

The new name, said Brixey, reflects the aspirations and will electrify the imagination of a new generation of university-bound students who have a growing appetite for artistic hybridization and creative industry careers, and who will become thought leaders and agents of change in the world.

“Our school recognizes the reality that the majority of jobs that our students will hold in the future are yet to be invented. We are providing our students with the foundational training, practical and critical thinking, and professional opportunities to expand their capacity to drive economic growth through creative experimentation and rich artistic invention,” he said.

Poised to tackle the future

AMPD’s mission underpins the realization by industry, government and the academy that in the world today, creativity is the most important transferable skill and an asset that is in critical demand.

Brixey highlighted how this is evident through the emergence of ecologically sustainable designs for everyday life. The arts, he noted, play a pivotal role in raising global awareness on critical issues through performance, exhibition, scholarship and “creative” coding. Curatorial practices preserve world history, identify interrelationships between cultures, and open up new ways of seeing and understanding the world. Digital technologies inspire new ways of creating, expressing and mobilizing human knowledge. Transparency, access, equity and social justice are the hallmarks of current and future creative endeavours.

Just as the artist Michelangelo designed an scaffolding structure to overcome the technical and physical challenges of painting the Sistine Chapel, so will future generations of artists, performers and cultural innovators overcome physical and virtual challenges as they create new multi-sensory and responsive designs for use in medicine, science, engineering, business, law and more, Brixey said.

Innovation and ingenuity are at the heart of AMPD, said Brixey. He noted that, among other initiatives, AMPD is the research lead on a Canadian Foundation for Innovation proposal titled 3Space: Accelerating Convergence and Innovation in Spatial Imaging, Interactive Digital Environments and Locative Media. “3Space will investigate a new kind of hybrid space that integrates the three-dimensional physical space in which we live, the virtual space we inhabit through interactive devices and computer screens, and the networked space whose topology connects people, places and the growing Internet of  Things,” said Brixey.

He noted that in the past year alone, AMPD has established 24 new undergraduate awards to support student innovation and creativity. The school is also expanding career development activities available to students, and the involvement of alumni as mentors.

Philanthropists Joan and Martin Goldfarb, long-time supporters of the arts at York University, voiced their whole-hearted support for AMPD.

“A name change is only an indication of other changes,” said Joan Goldfarb. “We live in a world of enormous technological change but if you think carefully, culture is at the centre of this change.”

“The school’s new name signifies that here are the facilities, the faculty and the scholarships to support students in their creative aspirations. We also have the leadership of Dean Brixey to accomplish our dream,” she said.

Martin Goldfarb noted that AMPD students will know they have the grounding to be leaders in our society. “Leadership is about ideas and the ability to create followers,” he said. “The arts stimulate creativity, innovation and collaboration.

“With this new name, we open the doors to allow students to participate at all levels of a creative, open, intellectually stimulating  society, and to bring to that world a broadening of interest and understanding and be mindful of beauty and rapture that is only found in the artistic imagination,” he said.

York alumnus Jim Mirkopoulos (MBA ’98), vice-president operations at Cinespace Film Studios in Toronto, reinforced his longstanding support for the school and its leadership role in arts education. “York University has been home to a generation of leading talent in the film and television industry,” he said. “The new name describes a progressive art school that will train creative professionals, including preparing students for careers in film, television and media.”

Toronto’s film and television industry directly employs more than 25,000 people working in front of and behind the camera, and screen-based companies have invested $1.19 billion in on-location filming in the city, so the industry has considerable influence on economic growth and culture production,” said Mirkopoulous. “AMPD is one of North America’s leaders in innovative filmmaking, digital media, 3D film technology and artistic production, and it holds a  unique position in nurturing the next generation of filmmakers, artists and thinkers to shape the creative economy.”.

The event was emceed by Francesca Accinelli (BA ’92), director of National Promotions and Communications at Telefilm Canada. A graduate of the first interdisciplinary fine arts program at York, she credited that experience as foundational to her career success.

“Having this interdisciplinary background is invaluable not just in the arts but in all professions,” she said. “AMPD has taken the strengths of its interdisciplinary programs and its central position in a leading world-class research institution to create an arts education that addresses the need for creativity and innovation in the global economy.”

“Our students will inherit a world where imagination alone is simply not enough. Creativity is the art of the disciplined imagination, and it is the natural terrain of AMPD, “he said. “In York’s School of the Arts, Media, Performance & Design, we are preparing our students to pioneer and redefine the outermost edges of that terrain. Together, we are defining the future of creativity.”