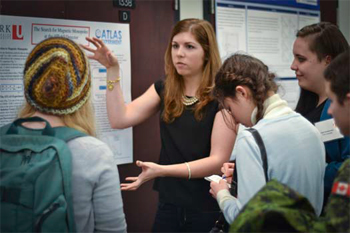 There must be an exceptionally good reason to travel to Quebec City during the cold of January, but that is exactly what six female physics students from the Faculty of Science at York University did last month.

On Jan. 9, the group travelled to the Canadian Conference for Undergraduate Women in Physics (CCUWiP) at Laval University. The three-day conference offered numerous panels featuring presentations on potential career paths, student and industrial research, and graduate life. Talks were given by successful female physicists, who detailed their personal and professional triumphs and struggles. There was also a university grad fair that offered the group a chance to survey graduate studies opportunities.

A diverse array of discussion topics ranging from the experience of being a woman in the world of physics to the search for the theorized magnetic monopole, from Biophysics to Astrophysics, the gendered workspace and more, were presented at the plenary session.

“We giggled about the dating prospects of being the only female in an upper year classroom, yet were also able to debate the serious problems surrounding the gender discrimination in our line of work,” said Andriyevska.

The group discussed the stereotype that physics is a field of study that attracts males more than females. They also enjoyed a myriad of opportunities to network with female physics academics, researchers and industry professionals in a number of mentorship events.

According to a 2010 report by the Natural Sciences & Engineering Research Council of Canada, at the bachelor level in the 2008-09 academic year, women represented 39 per cent of the total enrolled students in the physical sciences and mathematics, although the enrolment percentage further drops for Masters and PhD levels.

“Our own Department of Physics and Astronomy (PHAS) at York University is well aware of the gendered gap among students,” said Andriyevska. “Despite the prevalence of male faculty (a trait common to virtually all universities), female students are provided the kinds of opportunities and mentorship that will ultimately close this gap.”

Such outreach activities include meeting other female physicists. Late last semester, the department arranged for a number of undergraduate female physics students to accompany York physics Professor and particle physics researcher Wendy Taylor to meet Wilfrid Laurier University physics Professor Shohini Ghose over lunch. Ghose, who is a prominent physicist and an academic, is the director of the Laurier Centre for Women in Science. Following this very successful and productive lunch, the department offered an opportunity to six female students to attend the CCUWiP

“Motivated and supported by our department, with many inquisitive questions and open minds, we travelled to attend the CCUWiP,” said Cooper. “By the end of our three-day stint, we were physically exhausted and mentally energized. Inspiration and motivation coursed through our veins as we returned home, excited about our future and grateful to the Department of Physics and Astronomy at York University for the opportunity to have been a part of such a wonderful event.”