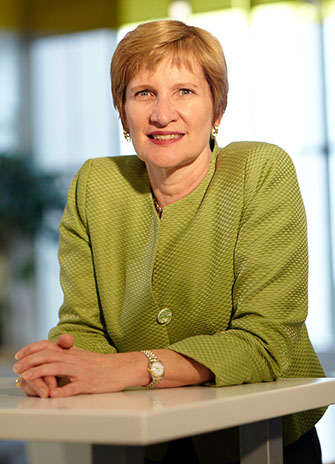 “In a long and extraordinarily successful career in corporate and investment banking, Marianne Harris has demonstrated that she is a powerful leader who inspires respect and trust,” said Edward J. Waitzer, Jarislowsky Dimma Mooney Chair in Corporate Governance at York University’s Osgoode Hall Law School and the Schulich School of Business, and director of the Hennick Centre. “It is a great honour to present the Hennick Medal to Marianne in recognition of her impressive contributions to business and law.”

An alumna of York University, Harris (JD/MBA ’83) has demonstrated an exemplary career at the intersection of business, law and public policy. She is chair of the Board of Directors of the Investment Industry Regulatory Organization of Canada. Most recently, she was managing director at the Bank of America Merrill Lynch Canada and president, corporate and investment banking, for Merrill Lynch Canada Inc. Harris has extensive corporate and investment banking experience gained from over 29 years of advisory work in the U.S. and Canada. Before joining Merrill Lynch, Harris was head of the Financial Institutions Group at RBC Capital Markets.

More about the Hennick Medal

The Hennick Medal is presented annually to a distinguished leader who has earned international recognition in the business and legal communities. Previous recipients of the Hennick Medal are: Kathleen Taylor, former president and CEO of Four Seasons Hotel and Resorts and now chair of the RBC Board of Directors, in 2010; Tye Burt, former president and CEO of Kinross Gold Corporation, in 2011; Moya Greene, CEO of Royal Mail Group, in 2012; and Gregory Sorbara, former MPP, Vaughan and now chancellor of York University, in 2013.

Launched in 2009, the Jay and Barbara Hennick Centre for Business and Law – a joint initiative of Osgoode Hall Law School and the Schulich School of Business – is the first Canadian centre to promote and develop joint business and law scholarship and education. Made possible by a gift from Jay and Barbara Hennick, the Hennick Centre’s flagship is the joint JD/MBA program offered by Osgoode and Schulich. The Hennick Centre also draws together the teaching and research strengths of the Davies Fund for Business Law and other endowed chairs, including the Jarislowsky Dimma Mooney Chair in Corporate Governance, cross-appointed to Osgoode and Schulich.