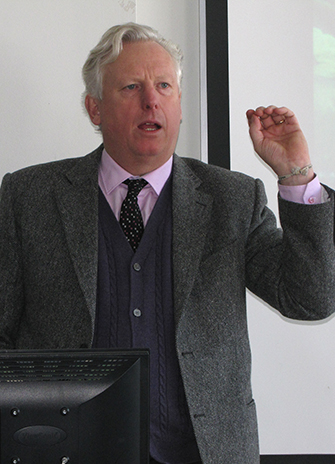 David Miller, president and CEO of the World Wildlife Fund-Canada and a recently appointed adjunct faculty member of the Faculty of Environmental Studies (FES) at York University, signed a Memorandum of Understanding. The MOU outlined WWF-Canada’s commitment to the creation of partnerships between FES researchers and students and WWF conservation projects across Canada.

That same day, Friday, Jan. 30, Miller also delivered his first two lectures as an adjunct faculty member in collaboration with colleagues Roger Keil and Peter Love of FES. The lectures echoed the contours of his professional career in the private and public sectors.

In Keil’s Foundations of Urban and Regional Planning class, the former mayor of Toronto discussed the history of public transit in the city, arguing for a focus on Light Rail Transportation as a cheap and effective mode of expanding the TTC’s transportation networks.

Leaving out the name of Toronto’s infamous and most recent former mayor, Miller argued that emphasis on light rail in suburban development could not only provide an expansive transportation network, but also foster an equitable “city for all”.

During his second lecture, in Love’s Business and Sustainability class, Miller brought his role at WWF-Canada to the fore, discussing the organization’s work on freshwater conservation throughout Canada.

He drew particular attention to WWF’s 2014 Living Planet report which, in September, found that the world’s wildlife populations have been cut in half since 1970.

Later in the visit, Miller was joined by former master in environmental studies graduates, Jessica Park and Juliana Dutkay, both of whom are now employed at WWF-Canada.

And, in a surprising turn of events, Miller was also joined by WWF’s panda mascot. Refusing to be outshone, York surreptitiously invited its famed lion to the fray, and the two quickly became friends.

The event was capped off by the signing of the MOU between Miller, representing WWF-Canada, and Noël Sturgeon, dean of FES. The agreement outlines the creation of several positions for FES students for field experience and placements at WWF-Canada, as well as support for mutual research-related goals of FES and WWF-Canada.

The partnership between WWF-Canada and York’s FES marks the beginning of a symbiotic working relationship. With both organizations focused on similar causes, the MOU will allow students to work towards progressive, transformative scholarship within Canada’s foremost conservation authority.