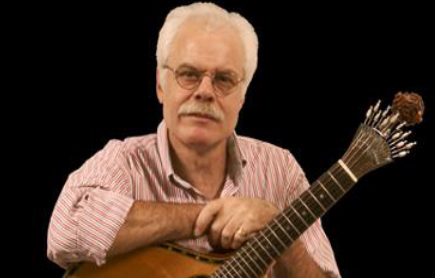 Musician, instrument maker and ethnomusicologist Nuno Cristo will not only talk about popular Portuguese music over the past century, he’ll also perform many groundbreaking songs at the next Lusophone Coffee Hour.

A century of Portuguese Popular Music, with Nuno Cristo will take place Monday, Feb. 9, from 4 to 5:30pm, at 562 Ross Building South, Keele campus. It is presented by the Portuguese Studies Program in York’s Department of Languages, Literatures and Linguistics in association with Instituto Camões. Coffee and cookies will be served. Admission is free.

Cristo will present a historical overview of the characteristic genres of popular music made in Portugal since 1910, including the “nacional cançonetismo” of the Estado Novo, thepost “25 de Abril” revolution songs, and the Novo Fado and Pimba.

This lecture/mini-concert will focus on the most significant periods of Portuguese music since the implantation of the republic at the beginning of the 20th century. Presented with a socio-political perspective and analysis, the topic is explored as culturally constructed. This involved the exaltation of Portuguese identity by the propaganda machine of Estado Novo, the folklorization of the country, the reaction against the nacional cançonetismo by the badaleiros, the songs of political intervention and the late folk revival in the 1970s.

The influence of imported genres such as rock, pop/rock and hip-hop, performed in Portuguese, will be also treated as belonging to this corpus of popular music. Approaching the new millennium, the discussion will center on the two main current paradigms of the Portuguese music industry – the Novo Fado and Pimba. Special attention will be given to the role of Lusophone Africa, Brazil and the diasporas in the development of Portuguese popular music.

As a soundscape for his talk, Cristo will play popular music tunes on the cavaquinho, the alleged great-grandfather of the ukulele.

Born in Lisbon, Portugal in 1960, Cristo is also an instructor and researcher of world musical traditions with a special emphasis on Portuguese music. He has self-produced two CDs, collaborated with Nelly Furtado, Béla and others, recorded live for CBC radio, and played internationally in the United States, Cuba, Macau (China) and Portugal. Based in Toronto since 1985, he has been a recipient of grants from the Toronto Arts Council, the Ontario Arts Council and the Canada Council for the Arts. Cristo holds a master’s degree in music, specifically ethnomusicology, from York University.