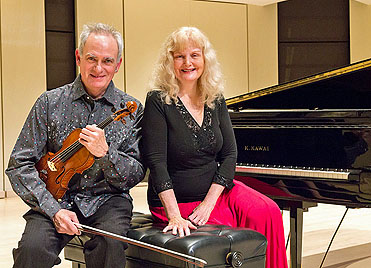 Renowned Canadian musicians and York music professors, violinist Jacques Israelievitch and pianist Christina Petrowska-Quilico, come together for a concert featuring selections from The Complete Mozart Violin Sonatas on Feb. 5 from 12:30 to 1:30pm at the Tribute Communities Recital Hall. The event is free and open to the public.

Wolfgang Amadeus Mozart has composed over 600 musical pieces in his lifetime and is considered one of the most brilliant and influential classical composers. Born in Salzburg, Austria in 1756, Mozart’s earliest works between the ages of six to eight years old, was Violin Sonata, KV 6-9; his first four sonatas for keyboard and violin.

Internationally acclaimed violinist, Israelievitch served as concertmaster of the Toronto Symphony Orchestra for two decades before joining York University’s Music Department in 2008. He performed chamber works with such luminaries as Emanuel Ax, Yefim Bronfman and Yo-Yo Ma, and performs regularly as part of the Israelievitch Duo with his son, percussionist Michael Israelievitch. In 2008, The Toronto Musicians’ Association presented him with its Lifetime Achievement Award in recognition of his distinguished contribution to the performing arts in Canada.

One of Canada’s foremost pianists and a multiple Juno nominee, Petrowska-Quilico has appeared in solo recitals, chamber settings and with orchestras on four continents. Widely recognized as an innovative and adventurous artist, she is a longtime champion of contemporary and Canadian music, and has premiered more than 100 works by leading North American and European composers. She was chosen as one of the 20 Can’t–Miss Classical Pianists of 2014 by CBC Music, placing her in a shared spotlight with some of the best known pianists in the world.

This is the fourth in a series of five concerts over which the duo will perform the entire collection.

For more information, visit the Faculty of Fine Arts website.