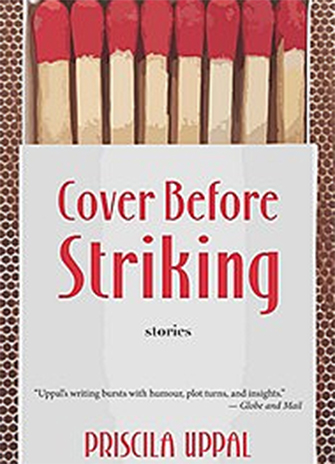 Taken from a box of matches, the title warns of the possibility of fire and burning. It’s a theme that smolders throughout the collection.

“The characters are all experiencing an emotional fire. They are looking for alternative ways to live, to cope, because of the intensity of what they’re experiencing,” says Uppal. “It takes really different forms in the collection, but I think all the stories share that challenge, that problem.”

Cover Before Striking (Dundurn Press) is launching Monday, Feb. 2 at 7pm at the Monarch Tavern, 12 Clinton St., Toronto. Everyone is welcome to attend and admission is free. Best Canadian Essays (Tightrope Books), edited by Christopher Doda and Natalie Zina Walschots, will also launch that night. There will be readings from both books.

“Cover Before Striking” is also the name of one of the short stories in the collection, which won the Gloria Vanderbilt Short Fiction Award. It is told from the point of view of an institutionalized pyromaniac with a need to communicate to the world. What the reader gets is a glimpse into her mind through little fragments of journal writings.

“It is in a very experimental structure. There are parts of every journal entry that are burning up at the bottom of the page, disintegrating, basically turning to ash,” says Uppal. “It’s really like a poem. Some of the fragments are one sentence, some of them are half a page. They are quite short and incredibly intense, and they are all meant to last the flick of a match.”

All the collection’s characters are on the edge of something, battling their own fires.

In the story “Mycosis”, a woman finds mould growing in her apartment. Thinking they are creatures she has to care for, the woman becomes a hermit in an apartment that becomes overgrown with mould. In another story, “Veritgo”, an Olympic diver finds she is gaining weight by the minute after toppling from the top of the diving tower.

The 13 stories span a range of styles, from realistic to sci-fi to horror, where the characters are all searching for alternative ways to communicate and to be heard. The collection is taken from two decades of stories published in various journals and anthologies.

Uppal says there seems to be a resurgence of popularity for short stories today. Much of that she attributes to Canadian short story master Alice Munro winning the Nobel Prize in Literature in 2013 and Lynn Coady winning the 2013 Giller Prize for her short story collection Hellgoing.

“The short story is once again coming into fashion and getting its due respect as a literary form that can be as exciting and satisfying as reading a novel,” says Uppal. “You can have a full, emotional and satisfying experience in 10 minutes.”

She hopes each of the stories will provide readers with an emotional transformation.