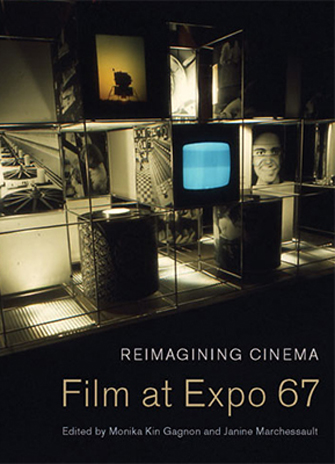 York University Professor Janine Marchessault will launch her book  Reimagining Cinema: Film at Expo 67 on Wednesday, Jan. 28 at a Cinema Expo 67 event at The Gladstone Hotel.  The launch will include special screenings of two films that have not been shown since the 1967 world fair in Montreal.

Co-edited with Concordia Professor Monika Kin Gagnon, and with contributions by York Professor Seth Feldman, Reimagining Cinema: Film at Expo 67 offers readers an in-depth look into why the experimental and revolutionary films shown at the 1967 World Fair had such an impact on arts and culture in the 1960s. The book includes essays and interviews along with 130 color reproductions of Expo’s most innovative and boundary-pushing films.

Expo 67, in its utopian aspirations, invited artists to create the world anew. What distinguished Montreal’s exhibition from previous world fairs were its dramatic displays of film and media, transformed into urban and futuristic architectures. Reimagining Cinema explores the innovations that film and media artists offered Expo audiences and presents extensive visual material to reconstruct the viewer’s experience.

At the pinnacle of a new global humanism, cinema was expanded beyond the frame into total environments, multi-screens, multi-image and 360-degree immersion – experiments often seen as a harbinger of the digital age. Taking this expanded cinema as a starting point, the contributors focus on eight screen experiments, and employ innovative methodologies to reveal the intricacies and processes of production, while including factual descriptions, interpretive essays, interviews, and image dossiers. The book reflects how the Expo 67 film-events were encountered as creative experiments that resonated with broader 1960s arts and culture, and as institutional collaborations with artists.

A professor in the department of film in York’s School of the Arts, Media, Performance & Design, Inaugural Director of Sensorium: Centre for Digital Arts and Technology Research Marchessault studies utopian cinematic spaces and experiences, excavating some of the 20th century’s most striking experiments within film and media. In 2012, she received a Trudeau Award to support her research and curatorial practices in the area of new city spaces. She is also the author of McLuhan: Cosmic Media (2005) and co-edited Fluid Screens, Expanded Cinema (2007); 3D Cinema and Beyond (2013); and Reimaging Cinema: The Films of Expo 67 (2014).

By The Time We Got to Expo, a new film by Philip Hoffman, associate professor of production in York’s Department of Film, and York alumnus Eva Kolcze (MFA ’14), with sound by York alumnus Joshua Bonnetta (BFA Spec. Hons. ’04), will also be shown.