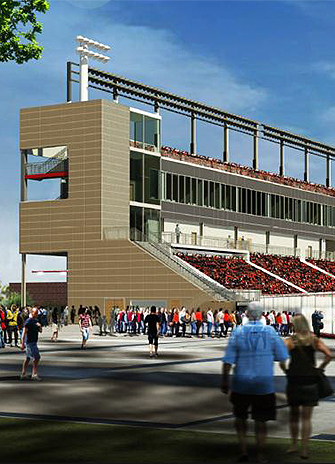 Get hyped, York. The Toronto 2015 Pan Am and Parapan American Games are coming to York University, and with them will come a world of excitement, with thousands of athletes, coaches, trainers, guides and support personnel arriving from Latin American, South America, North America and the Caribbean.

The Pan Am/Parapan Am Games are the world’s third largest international multi-sport games, held every four years immediately before the Olympic and Paralympic Summer Games. Only the Summer Olympics and the Asian Games are larger in scope or size, and although Canada has hosted the games twice before in Winnipeg, this will be a first for Toronto and York.

“Track and field is one of the premiere events of the Pan Am Games, just like it is at the Olympics,” says Jennifer Myers, director of sport and recreation at York University. “That will add huge excitement and electricity on campus, especially during the finals of the men’s 100-metre race. It’s pretty awesome to experience.”

The Pan Am Games will run from July 10 to 26. Training for tennis will happen from July 6 to 10, with matches taking place from July 11 to 16. The Canadian Tennis Centre will host 48 male and 32 female tennis players in singles, doubles and mixed doubles events on its hard courts.

Track and field event training will take place from July 16 to 20, followed by competition from July 21 to 25.

This will be the largest Parapan Am Games ever. Wheelchair racer Brent Lakatos is expected to compete at the Parapan Am Games at York. He won three gold medals at the 2013 IPC World Championships and is considered one to watch.

Pan Am track events will include races from 100 up to 10,000 metres on the new synthetic track at York, as well as hurdles and steeple chase. Athletes will compete in shot put, discus, javelin and hammer throw, pole vault, high and long jump at the CIBC Pan/Parapan Am Athletics Stadium.

Canada’s athletes have had a strong showing in competitions leading up to the games, winning 17 medals at the Glasgow 2014 Commonwealth Games and five at the 2013 World Championship, including a silver by Canadian heptathlete Brianne Theisen-Eaton.

Tickets are on sale now. For more information or to purchase tickets, visit the Pan Am/Parapan Am Games website.