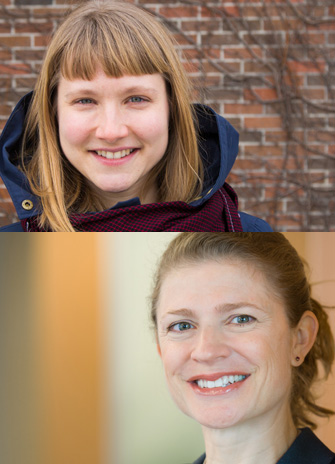 Nicole Barrett, director of the Joint International Justice and Human Rights Clinic (IJHR) at Osgoode Hall Law School and the University of British Columbia Faculty of Law, and Osgoode student Eleonore Gauthier are returning home following a trip to Chad. Barrett and Gauthier were in the central African nation from Jan. 10 to 19 to monitor the trial of 21 former state security agents of the Hissène Habré dictatorship.

Barrett and Gauthier observed the ongoing prosecution of agents of the 1982-1990 regime, which is said to be responsible for 40,000 political killings and systematic torture. The trial began on Nov. 14, 2014, but was suspended for more than a month because of a lawyers’ strike. Proceedings resumed Dec. 23, 2014 and it is expected to last until the end of January 2015.

The defendants are accused of murder, torture, kidnapping and arbitrary detention. Among those on trial are Saleh Younous, a former director of the Directorate of Documentation and Security Directorate (DDS), Habré’s political police, and Mahamat Djibrine, who is described as one of the “most feared torturers in Chad” by Chad’s National Truth Commission.

“Although the trial is very significant, as it is an African national court holding its past officials responsible for atrocities, the world is slow to take notice,” Barrett said. “Our presence at the trial will provide a much-needed spotlight on this historical event.”

Barrett was contacted by Human Rights Watch when they realized that they were the sole international presence at the start of the trial and asked if she would serve as an international legal monitor. She then received funding for the trip from Silicon Valley.

Gauthier is in the Osgoode-Université de Montréal Juris Doctor/Bachelor of Civil Law (JD/BCL) Program. She completed her LLB in civil law in April at Université de Montréal and is now spending this year at Osgoode to obtain a second law degree: a JD in common law. “At Osgoode, I take both first-year and upper-year classes,” Gauthier said. “I am part of the IJHR [International Justice and Human Rights] clinic and this is how I met Professor Barrett. She invited me to assist her in monitoring the trial.”

Gauthier has “a strong interest in international public law,” having taken numerous classes on the subject at Université de Montréal and an intensive human rights class at the International Institute of Human Rights in Strasbourg, France. She also interned one summer for the Office of the President of the International Criminal Tribunal for Rwanda.

Barrett was previously a trial lawyer and a legal officer for the International Criminal Tribunal for the former Yugoslavia in The Hague. She also served as an advisor for the defence of several Guantanamo detainees and monitored Guantanamo military commissions for Human Rights First.

Barrett said the trial in Chad comes as a special court in Senegal wraps up its investigation into alleged crimes by Habré. His trial could begin in May.

The International Justice and Human Rights Clinic, which was launched in September as a pilot clinical program between the two law schools, gives students the opportunity to work on pressing human rights and global justice concerns through hands-on work on international cases and projects. The year-long clinic is for second and third-year students at UBC Law and Osgoode Hall Law School at York University. The clinic is based at UBC, with Osgoode students participating by video link.