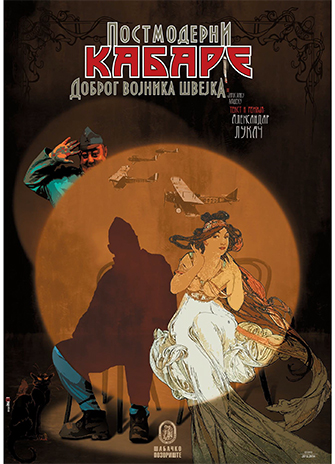 The theatrical production Good Soldier Schweik’s Postmodern Cabaret, written and directed by York University instructor Aleksandar Lukac (MFA ’95), was named one of the top five shows in Serbia in 2014.

Serbia’s largest circulation daily newspaper, Vecernje Novosti, published its annual best-of lists in culture and arts in Serbia Jan. 4, listing Good Soldier Schweik’s Postmodern Cabaret as one of the best plays of the year. Lukac staged his adaptation as part of Commedia dell’Arte acting workshops conducted with the ensemble of the Shabac National Theater in Shabac, Serbia.

The original script for the Good Soldier Schweik has a Glendon College connection as it was partially workshopped with Glendon drama students for a class production of WWI (Re)visions of the Aftermath in March 2014. The production was part of a student collective collaboration commemorating the centenary of the First World War. It was also a part of a larger social media experiment – the show broadcast live on YouTube and the audiences, both in the house and online, were able to communicate back to the actors via Twitter messages. The messages were projected onto large screens on stage. The production is still available on YouTube.

Theatre critic Dragana Boskovic says she chose Good Soldier Schweik’s Postmodern Cabaret as one of the top five pieces of the year because “while other theatres were largely unsuccessfully searching for an appropriate production commemorating the centenary of WWI, Shabac Theater had the wisdom to stage a humorous, modern and ironic Good Soldier Schweik’s Postmodern Cabaret. Director Lukac rests his well-elaborated and studious production on Hasek’s legendary humour and an exceptional acting ensemble.”

Lukac teaches in the Drama Studies program at Glendon College and theatre at the Keele campus. He says he feels particularly rewarded by the fact that the script, which had its beginnings in a collaboration with his Glendon students, ended up as a very successful professional production across the world.

He is also pleased that his play honours Hashek, an author who is not as well known in Canada as he is in Europe, even though his Good Soldier Schweik is one of the most powerful anti-war satires on the carnage of the First World War.

Lukac is the internationally acclaimed former artistic director of the National Theater Belgrade and six-time winner of Best Director at The Festival of Serbian Theatres. Other credits to his name include: ARC’s Family Stories – Belgrade; the Hong Kong Idea Festival-bound Unicorn Horns; and the Company of Sirens’ Black Magic.