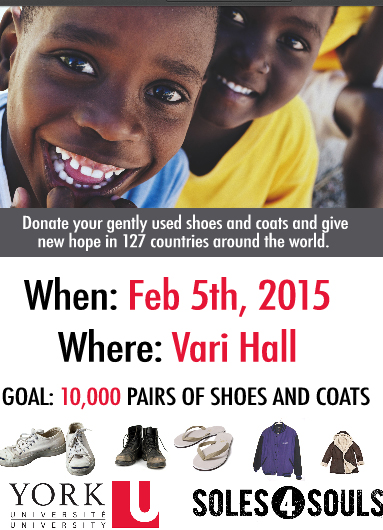 One person can make a difference, but York student and employee Kalpana Bilimoria is hoping 25 people can make even more of a difference, potentially affecting the lives of 10,000 people, by organizing a shoe and coat drive.

As part of a Change Project class assignment for the course Prospects and Perils in the 21st Century, 25 of the about 160 students in the course have banded together to collect as many used shoes and coats as possible. To reach their goal of 10,000 items, they are asking members of the York community to rummage through their closets and bring in all the used shoes and coats they can carry to Vari Hall on Thursday, Feb. 5, from 10am to 4pm.

The group will donate all collected shoes to non-profit organization Soles4Souls. The coats will be distributed to homeless people and others in need in downtown Toronto.

The whole idea of the project, says Bilimoria, who is working toward her bachelor’s degree in human resources in the Faculty of Liberal Arts and Professional Studies, is to realize “how we as individuals can do something, however small it may be, and can create a synergy and make a positive impact on someone’s life. Small efforts/deeds can create big change. As the age-old adage says, ‘the whole is greater than sum of its parts.’ ”

Soles4Souls was chosen to receive the shoes because they have a well-developed support system, a comprehensive website, a drop-off location not far from the University, a mission of anti-poverty and the highest rating in Charity Navigator, with low administrative expenses. It is a global not-for-profit organization that fights the impact of poverty. The organization has distributed more than 22 million pairs of new and gently worn shoes to people in 127 countries.

“This change project has made the class realize how fortunate they are. There are so many people who have very little, who are constantly struggling to make ends meet. The hope is to create awareness, a responsibility and the wiliness to do something for someone else,” says Bilimoria.

“The students feel that we as a society should learn to look more at those in need and learn to share. Our society has become very consumeristic and in this course the class realized the huge ecological footprint that we in North America have on this planet.”

Have shoes and coats that haven’t been worn in years? Gather them up and bring them to the shoe and coat drive this February.