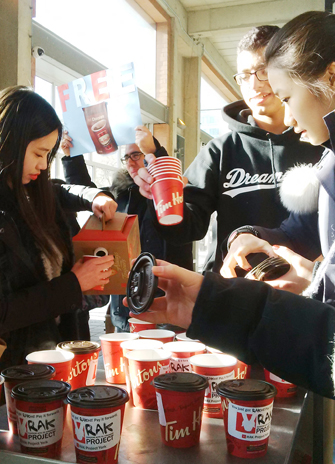 A York student-led initiative promoting positivity through random acts of kindness kicked off the winter term with something sweet and creamy: hot chocolate.

On a bitterly cold Jan. 7, students behind the Random Acts of Kindness (RAK) Project greeted those who braved the wind chill of about -30 C near the Keele campus bus loop with 200 cups of the warm drink from Tim Hortons – free of charge. The reaction from many passersby was, “Really?”

Really. If you’ve been “RAKed,” you’ve just received a random act of kindness from a stranger.

Inspired by the Feed the Deed online movement, the RAK Project was initiated by Yaakov Green, a second-year biology student in the Faculty of Science at York University. To get the project going, he recruited the help of his friend Ben Shachar, and together they enlisted four other students who share a prestigious connection with them. Green and Shachar, along with Kristen McIntosh, Arpit Sharma, Betty Seifu and Sherry Wong, are all recipients of the Schulich Leader Scholarships – a scholarship program that was launched in 2012 by philanthropist Seymour Schulich (Hon. LLD ’03) to provide financial aid to the most promising students entering a Canadian university undergraduate program in science, technology, engineering and mathematics (STEM).

“The Schulich scholarship has opened up many doors and given me access to a network of talented and exceptional people,” says Green, a 2012 Schulich Leader. “Our goal with RAK is to empower members of the York community to effect positive social change at York through acts of kindness. Whether they are students, faculty or staff, we believe people have the potential to make a significant impact.”

Since its first event on Halloween when students in two lecture halls were surprised with free candy, RAK has become a fast-growing club with almost 200 active members and an aggressive social media campaign. Because York is a commuter school, Green says many students tend not to get as involved outside of class.

“We want to perpetuate kindness and stimulate student involvement in an effort to create an overall positive university experience for York students and to generate an atmosphere of happiness and wellness in the York community at large,” he adds. “We also hope to reach out to Schulich Leaders at other universities to establish other RAK chapters throughout the country and spread the social movement using York as a model.”

Wong, a 2014 Schulich Leader and first-year biomedical science student, says she jumped on the chance to help launch RAK with other Schulich Leaders at York.

“The scholarship is more than just about money. It allowed me to meet other high-achieving students I previously admired on the web,” Wong says. “Knowing that Seymour Schulich is willing to invest in our future and that someone appreciates and recognizes the work we did in high school motivates us to do better. RAK is really about starting a movement that motivates others to show kindness to one another.”

For Wong, the kindness she experienced in the beginning of the school year has stayed with her. She had just bought text books and begun walking back to her residence when complete strangers offered to help carry her books all the way.

“Little things like that can put a smile on someone’s face for a long time,” she says.

Sharma, a 2012 Schulich Leader and third-year biochemistry student, and Shachar, a 2013 Schulich Leader and second-year biomedical science student, both agree. Whether it’s holding the door for someone or giving directions on campus, “We want to get people to talk to each other. We want them to know that it’s cool and OK to help each other,” they say.

While some may be skeptical about RAK at first, McIntosh and Seifu believe there is a big reception for it.

“York is really a great school and we want to showcase the kindness and generosity of the York family,” says McIntosh, a 2013 Schulich Leader and second-year computer science student. “Our mission is not over the top,” adds Seifu, a 2014 Schulich Leader and first-year engineering student, “it’s the small acts that make the big difference.”

Jeff O’Hagan, York’s vice-president of advancement, applauds the students for taking an important initiative to improve the lives of others.

“It is terrific to see how Mr. Schulich’s philanthropy has inspired many York students, including the Schulich Leaders, to give back,” O’Hagan says. “The dedication and generosity of these exceptional students is making a major impact on campus and perpetuates a legacy of philanthropy.”

David Goodman, executive director of Schulich Leader Scholarships at UJA Federation of Greater Toronto, describes the RAK initiative as a testament to the character embodied by Schulich Leaders pursuing STEM degrees at York.

“These are ambitious students who excel in academics, yet possess the leadership qualities that make their extracurricular endeavours a success as well,” he says. “We are proud of their commitment to give back to York and enhance the culture on campus through RAK.”

For more information about the RAK Project, visit Facebook.com/rakprojectyork.