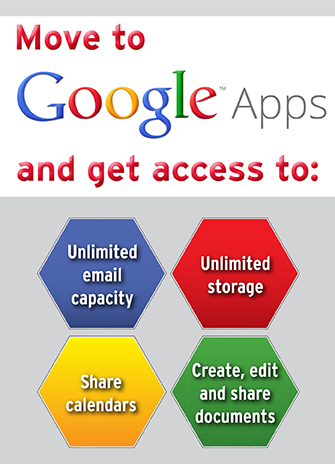 York University is moving its @yorku.ca undergraduate email accounts to a York U service powered by Google’s web-based suite of services and collaboration tools known as Google Apps. The new Google Apps at York includes:

All of this will be provided as a York U service, with students still having a York U email address. Starting Jan. 13, York U students can sign up and start their move to Google Apps at York.

The move to Google Apps addresses requests by York U students for enhancements to their existing York-provided email service. A 2011 student survey about information technology revealed that students wanted a more flexible, portable service, with additional options beyond what was offered by the York-supported MyMail email service.

“Making these Google services available to our students as York University services we’re sure will be a very positive thing for our students,” explains Bob Gagne, chief information officer, University Information Technology. “Though it is Google technology, these will be York services with the York brand, accessed by students using their own familiar Passport York usernames, and covered by a contract with Google that provides additional benefits such as no advertising.”

With the change, York University joins other Ontario universities like Ryerson, McMaster and the University of Ottawa in the move to using cloud-based email. The move involves York U undergraduate students only. Graduate students, faculty and staff will still be supported with the University’s internally hosted services.

“The vast majority of students are using these types of services in their personal lives and increasingly even in their K to 12 classrooms. Now they’ll be able to enjoy those same and even better features and benefits, like unlimited file storage and great mobile access, but they’ll be York services accessed with their York IDs,” says Janet Morrison, vice-provost students.

In selecting Google, a pan-University committee examined and evaluated alternative service providers and conducted several consultations with students. Google’s services emerged as the best fit to enhance the experience for York U students.

“It has been a lot of work by a lot of people to get us here and I’m very grateful for all of the effort to make this happen for our students,” says Gagne.  “I’m also very pleased that students have been so engaged and positive in helping to bring in Google Apps at York.”