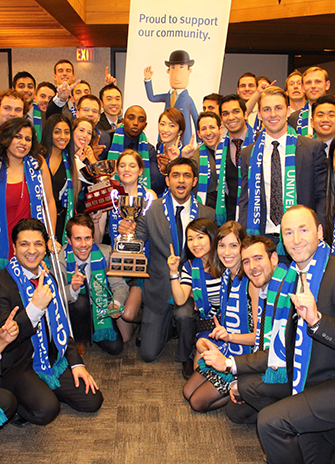 Team Schulich of the Schulich School of Business at York University defeated teams from 21 other Canadian graduate business schools to win the 2015 MBA Games.

About 650 students from 22 universities competed in this year’s games at DeGroote School of Business. Schulich won first place overall, including placing first in the case competition, in which teams were required to present an economic plan to make Hamilton a preferred destination for investment and workplace talent. Points were awarded across contests in three categories, including a spirit competition and a sports contest. Ryerson placed second overall and DeGroote third.

Participants in the 2015 MBA Games also raised charitable donations of more than $35,000 for Ronald McDonald House.

“I am so incredibly proud of Team Schulich. They worked very hard and came together as a team, and supported each other over the course of the weekend,” said coach Joe Fayt, a marketing instructor at Schulich.

“It’s an honour to win the MBA Games, given the calibre of students attending from all of the other schools. And we all got to meet so many amazing people from business schools from across the country.”

Fayt also thanked RBC, Team Schulich’s corporate sponsor, saying, “RBC has been sponsoring the Schulich MBA Games team since 2001, and we could not do this without their very generous support.”

Schulich MBA students will compete in several other national and international case competitions throughout 2015, including the regional competitions for the prestigious Hult Prize, Schulich’s own Developers’ Den, the Schulich International Case Competition, the Sanofi Challenge and others, said Fayt, who provides coaching support to many of the competing students. Schulich has sent case competition teams to Shanghai, Dubai, Paris, London, Sao Paulo, New York City, Boston and San Francisco.