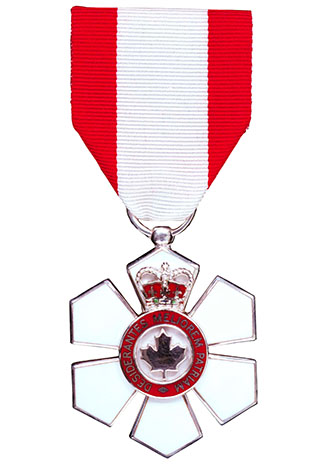 York University Board of Governors Chair Julia Foster, Faculty of Liberal Arts & Professional Studies Professors Susan McGrath and Edgar Dosman, and Robert Cox, professor emeritus of political science and social and political thought, are among the 95 new appointments to the Order of Canada, the country’s highest civilian honour.

The new appointees include three companions, 13 officers and 79 members. The appointments were made on the recommendation of the Advisory Council for the Order of Canada and announced Dec. 26, 2014, by the Office of the Governor General of Canada.

“This is a major honour and reflects the extraordinary contributions of our York community members to Canada,” said Mamdouh Shoukri, president and vice-chancellor, York University. “These new appointees to the Order of Canada represent the very best of our community. We are all exceptionally proud of their achievements and privileged to have colleagues of such distinction among us.”

Julia Foster has been appointed a member of the Order of Canada for her voluntary service in promoting the arts and Canadian culture. She joined the Board of Governors of York University in 2005 and was elected chair as of July 1, 2012.

Foster chairs the National Arts Centre Board of Trustees in Ottawa. She is the past chair of the 13th Annual Canadian Arts Summit, the Ontario Arts Council and the Stratford Festival. Foster is also a past member of the executive committee of the Ontario Cultural Attractions Fund; former trustee of the Bata Shoe Museum; past member of the Art Gallery of Ontario’s public affairs committee; and a past advisory council member of the Centre for Cultural Management at the University of Waterloo.

Her professional background in market research and financial management includes senior administrative positions at McCann Erickson and Environics Research Group, and time spent as president and CEO of Olympic Trust of Canada.

Her community contributions have included the advisory board of the Nonprofit Management and Leadership Program at the Schulich School of Business. In addition to her dedicated work in the arts, Foster has been active on various international corporate boards, including the Board of Directors of Brascan Corporation, and was also trustee of the Hospital for Sick Children.

In November, Foster was named one of Canada’s Top 100 Most Powerful Women in 2014 by the Women’s Executive Network.

York University researcher Susan McGrath (MES ’90), a professor in the School of Social Work in the Faculty of Liberal Arts & Professional Studies, has been appointed a member of the Order of Canada for her contributions to research and policy on refugee rights and for fostering collaboration among scholars in her field.

She serves as a member of the boards of the Canadian Centre for Victims of Torture and the journal Refuge. Her research and writing focus on community work with vulnerable populations, including refugees.

Her current funded projects explore the impact of collective trauma on community practice with refugees, GLBTT and Aboriginal populations; examine social sustainability among newcomers in three Canadian cities; and support the development of social work in Rwanda.

Recently, she and colleagues in Canada and Sudan studied enterprise development needs in camps for the internally displaced in Southern Sudan and Darfur. McGrath is the principal investigator of a Social Science and Humanities Research Council of Canada Strategic Knowledge Cluster grant to support the development of Refugee Research Networks across Canada and globally.

York University Professor Edgar J. Dosman has been appointed a member of the Order of Canada for his studies in Latin American history and politics, and for his role in advancing academic and cultural ties within our hemisphere. Dosman began his teaching career as a special lecturer at the University of Saskatchewan in 1968. He went on to join York University’s Department of Political Science in 1970.

During his academic career he has served on numerous projects and committees, both at York and at other academic institutions. Throughout his career his research interests have focused on international development thought, Western hemisphere studies, Canadian foreign and public policy, and regional conflict management (Central America / southern Africa).

Dosman has been internationally recognized for his biography of Raul Prebisch and lauded for his work in promoting academic and cultural ties between Canada and Latin America and the Caribbean.

Robert Cox, professor emeritus of political science and social and political thought at York University, has been appointed a member of the Order of Canada for his contributions to the field of international relations as one of Canada’s foremost scholars in the area of political economy.

A graduate of McGill University, Cox is cited as one of the intellectual leaders of the British School of International Political Economy, along with the noted British scholar Susan Strange.

In 1947, Cox worked at the International Labor Organization (ILO) in Geneva, Switzerland. He eventually became director of the ILO’s International Institute for Labour Studies and served in this role from 1965 to 1971. Cox left the ILO and took up a faculty position at Columbia University. From 1977 to 1992, he was professor of political science at York University.

Cox co-authored The Anatomy of Influence: decision making in international organization (1973) with Harold K. Jacobson. He is the author of Production, Power and World Order (1987) and “Social Forces, States and World Orders: Beyond International Relations Theory” (1981) in the journal Millennium. He is the co-editor of Approaches to World Order (1996) and The Political Economy of a Plural World: Critical Reflections on Power, Morals, and Civilization (2002).

Five York alumni have been appointed members of the Order of Canada. They are: Michael DeGagné (LLM ’10), for his support of residential school survivors and First Nations communities, notably as the head of the Aboriginal Healing Foundation; Patrick Johnston (BA ’73), for his contributions to the charitable sector as an innovator who develops more effective giving strategies for organizations; Adèle M. Hurley (Ba ’74, MES ’76), for her commitment to the conservation and the protection of Canada’s natural resources; John Barker Lawson (LLB ’51 [Osgoode]), for his transformative contributions as a volunteer in support of many of Toronto’s most important music ensembles and arts organizations; Eric Robert Walters (BA ’79, BSW ’82, MSW ’86 ), for his contributions as an author of literature for children and young adults whose stories help young readers grapple with complex social issues; and, Catherine Zahn (BSc ’74), for her contributions as a neurologist, health care administrator and advocate on behalf of those living with mental health and addiction issues.

Recipients will be invited to accept their insignia at a ceremony to be held at a later date.