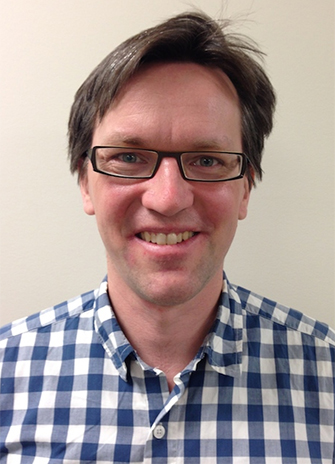 York Professor Andrew Eckford was one of seven finalists in the Bell Labs Prize competition last week for a project that could someday see robots swimming through veins and arteries, repairing tissues and destroying tumors.

The Bell Labs Prize recognizes proposals that “change the game” in the field of information and communications technologies by a factor of 10. The competition is designed to provide motivation and incentive to drive disruptive innovation.

Eckford and his team, York PhD candidate Nariman Farsad and Weisi Guo, a professor from the University of Warwick in the United Kingdom, were one of a handful to make it to the finals out of almost 500 applicants from more than 30 countries who submitted ideas. Three of the seven finalists went on to win.

“We were certainly up against some fierce competition,” says Eckford. “I met some of the teams during the semi-final round, and we made it through where teams from very prestigious universities did not, like Yale, Columbia, Michigan and Duke. The ultimate winner was from Princeton, and the other finalists included groups from Clemson and UIUC, as well as one from Belgium and another from Spain.”

The project Eckford entered into the competition was called Small Talk: Molecular Communication for Medical Nanorobotics. He says they were inspired by how cells in the body talk to each other; they don’t talk through radio waves, but by using chemistry, exchanging molecules to send messages and control each other’s behaviour.

“If we can harness this method, it could let us control tiny devices within the body. Imagine a fleet of robots swimming through the bloodstream, repairing tissues and destroying tumors, all coordinating their action by chemical communication,” says Eckford. “Related to this, we did earlier work in which we used mists of vodka to communicate a message across a tabletop.”

He calls competing in the Bell Labs Prize an amazing experience. Bell Labs is the industrial research arm of Alcatel-Lucent. Bell Labs is legendary in technology, having produced eight Nobel Prizes and developed world-changing inventions, such as the transistor, the laser and the charge-coupled device. It is one of the pre-eminent global research organizations and has a rich history of identifying and solving some of the greatest challenges facing the information and telecommunications industry. The competition was designed to identify some of the next great minds in the field and find new ways to contribute to the growth of the industry.

“During the semi-final round in October, we were hosted on the Bell Labs campus in Murray Hill, New Jersey, and got to see some of their work first-hand,” he says. “We were introduced to Bell Labs researchers and we’ve been encouraged to keep the collaboration going. It’s a huge honour for our work to be worthy of their consideration.”

Eckford is a professor in the Department of Electrical Engineering and Computer Science, Lassonde School of Engineering. As with all seven finalists, his team presented their idea to a panel of judges, including: Alfred V. Aho, Bell Labs alumnus and professor at Columbia University; John Cummins, senior adviser with Hawkpoint Partners; Kevin Fitchard, technology writer with Gigaom; Marcus Weldon, president of Bell Labs and CTO of Alcatel-Lucent; Michel Combes, CEO of Alcatel-Lucent; Robert Wilson, senior scientist at the Smithsonian Astrophysical Observatory of the Harvard Smithsonian Center for Astrophysics; Dr. Sangchul Lee, CEO of LG+; and Siya Xuza, entrepreneur.