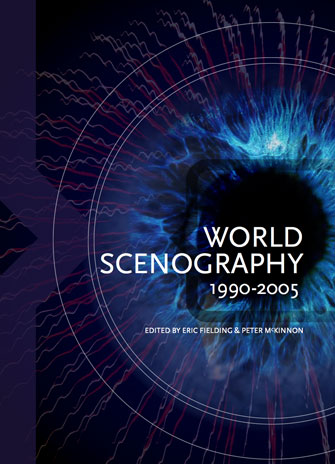 The launch of the second volume in the critically acclaimed World Scenography series takes place Dec. 16 from 3 to 7pm, in the Winters Junior Common Room, Winters College, Keele campus. The series documents significant theatrical design worldwide since 1975. The first volume launched in 2012 and earned the US Institute for Theatre Technology’s coveted Golden Pen Award in 2014 and was named the world’s most significant book on stage design that year.

The second volume in the World Scenography book series continues the visual feast. It presents a collection of significant and influential theatrical set, costume and lighting designs. The book covers the period from 1990 to 2005 and presents designs for 409 productions from 55 countries. The publication represents the work of hundreds of designers as researched by a group of more than 100 dedicated volunteers from around the globe. World Scenography is important because it documents and captures a visual record of material that is inherently ephemeral. When the curtain comes down on a show, a bit of history vanishes when the set is taken down.

The international editorial team for World Scenography is led by co-editors York theatre Professor Peter McKinnon and Eric Fielding, professor emeritus of scenic design in the Department of Theatre and Media Arts at Brigham Young University. Both of the series’ editors are leaders in the field.

The series looks at important and influential stage designs throughout the world and will ultimately cover the period from 1975 to 2015.  “No one has cataloged and published any work on international scenography since 1975, either in print or online in the past 40 years, other than catalogs of the World Stage Design exhibitions held in Toronto in 2005, Seoul in 2009 and Cardiff in 2013,” says McKinnon. “There have been books celebrating the designers of some countries and of some individual designers’ works, but nothing international.”

“In the second volume, I was particularly taken with the designs of Canada’s Michael Levine. My co-editor and I had decided that we would limit impose a limit of two  designs per designer in  the book, but found that Levine’s work was so startlingly arresting that we put four of his works into the text,” says McKinnon. “The most extraordinary to me was his production of Rusalka at the Paris Opera that was deceptively simple based in symmetry, both left to right and up and down.  For example, one act takes place in Rusalka’s bedroom in which every object has its mirror image opposite; while in another act, the room is flipped upside down with her bed and other furniture on the ceiling.”

With 1,582 photographs, the book will appeal to anyone with a visual sensibility or an interest in the staging of live performance. The series is the first since the four-volume Stage Design Throughout the World, by Belgian professor René Hainaux, which covered the period from 1935 to 1975. World Scenography is available in print and online, and once completed, the series will cover the periods of 1975 to 1990, 1990 to 2005, and 2005 to 2015 respectively.

McKinnon is professor of design and management in the Department of Theatre at York University. He has served as lighting designer for some 450 shows, principally dance and opera, across Canada and internationally, and has produced shows off- and on-Broadway and in Edinburgh, Scotland. A past president of the Associated Designers of Canada, he was an organizer of the Canadian exhibit at the 2007 Prague Quadrennial of Performance Design and Space. His editorial credits include the international lexicon Theatre Words and One Show, One Audience, One Single Space by Jean-Guy Lecat.

Fielding has designed scenery and/or lighting for more than 250 productions for stage, film, television and special events. He designed the gold medal-winning American exhibit at the 1991 Prague Quadrennial and created the World Stage Design exhibition, directing its premiere showing in Toronto in 2005. He is a 30-year member of United Scenic Artists 829, a Fellow and former vice-president of the United States Institute for Theatre Technology, and former editor of the journal Theatre Design &Technology (TD&T).

Both McKinnon and Fielding are long-serving executive members of OISTAT, a UNESCO-recognized organization that draws together theatre production professionals from around the world. The long list of international supporters of the World Scenography project includes the Social Sciences and Humanities Research Council of Canada. The series is published by the International Organisation of Scenographers, Theatre Architects and Technicians (OISTAT), a UNESCO-recognized organization. It is anticipated that following the publication of the three volumes, OISTAT will continue to publish another volume every 10 years.

The launch is free and open to the public. Light refreshments will be served.