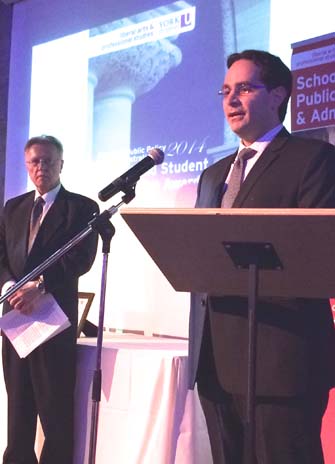 The School of Public Policy and Administration (SPPA) held its annual Alumni and Student Recognition Awards Dinner on Nov. 27.

Each year, SPPA recognizes its outstanding students and alumni for their contributions to advancing its undergraduate and graduate programs. This year two special awards of appreciation were presented to individuals who have made exceptional contributions to the school’s ongoing development. In addition, last year’s winner of the prestigious McLaughlin College Public Policy Scholarship was also recognized for academic excellence in the interdisciplinary field of public policy and administration.

This year’s master of ceremonies for the event was Corey Davidson, recent MPPAL graduate, recipient of last year’s student award and executive assistant to the assistant deputy minister of ServiceOntario. In addition, he serves as the president of the SPPA Alumni Association.

The student award winners this year were Anisa Vangjeli and Koosha Assadzadeh-Totonchi. Vangjeli is a recent graduate of the Bachelor of Public Administration (BPA) Honours Program (management stream), who is now enrolled in Carleton University’s Master of Public Administration program. She was honoured for her service to the school’s student association. Assadzadeh-Totonchi is a fourth-year student in the BPA Honours Program (policy analysis stream) and the recipient of the McLaughlin College Public Policy Scholarship. He received the SPPA certificate of achievement from McLaughlin College Master David Leyton-Brown.

This year the alumni award winner was Adriano Mena (BA Spec. Hons. ’01), who is a senior planner with the Ontario Workplace Safety and Insurance Board; and Becky Evans, manager in the Transformation Branch, ServiceOntario, was recognized with the SPPA community award for her commitment to providing practicum opportunities for the school’s fourth-year students.

The awards dinner keynote speaker was Fausto Natarelli (BA Spec. Hons.’84). Natarelli is the director of the Hurontario-Main Light Rail Rapid Transit Project, Metrolinx. His keynote address was titled “Big Impact Infrastructure and the Public Interest: The Rt. Hon. Herb Gray Parkway as a Case Study.” Natarelli is one of York’s best known graduates in the field of public administration. In 2014, he was awarded the highest honour of distinction in the OPS, the Ontario Public Service Amethyst Award, and in 2010 he won the Institute of Public Administration of Canada/Deloitte Public Sector Leadership Award. He is also the recipient of the SPPA’s first Alumnus of the Year award.

The final presentation of the evening was to Professor Daniel Cohn who was instrumental in founding the School of Public Policy and Administration in 2006 and who has served as its undergraduate program director, the school’s director and, most recently, as the Master of Public Policy, Administration and Law (MPPAL) graduate program director. He was presented with a certificate of appreciation for his commitment, dedication and exceptional leadership in those three key administrative positions at the school.

To hear from alumni of the school’s undergraduate, graduate and certificate programs about how their studies at York University have prepared them for their diverse, exciting and rewarding careers, visit the School of Public Policy and Administration website.