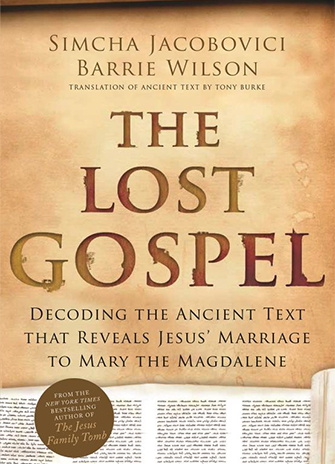 In the New Testament there is a 30-year gap in the life of Jesus, almost nothing between the time he was circumcised at day eight and the start of his ministry. What happened during that time? What was his life like, his education, family? When York University religious studies Professor Barrie Wilson and documentary filmmaker Simcha Jacobovici went looking for answers, they didn’t expect to find a hidden message in an ancient, coded and forgotten manuscript in the British Library.

Wilson and Jacobovici detail what and how they discovered this information in their new book, already a bestseller, The Lost Gospel: Decoding the Ancient Text That Reveals Jesus’ Marriage to Mary the Magdalene (HarperCollins Canada). French, Russian, Hungarian and Portuguese editions of the book are currently in the works.

What they found was a gospel revealing that Jesus and Mary the Magdalene were not only married, but they had two children together. In addition, Jesus and his family survived an early plot on their lives, not widely known until now. Wilson, who specializes in early Christianity, recognizes this news is controversial, but that makes the answer to why the manuscript was hidden all the more intriguing. “It’s a provocative book,” he says.

Wilson is the author of How Jesus Became Christian (St. Martin’s Press, 2009), longlisted for the Cundill International Prize in History and winner of the Joseph and Faye Tanenbaum Award. Jacobovici is a three-time Emmy-winning documentary filmmaker and lecturer, writer and host of the History Channel’s “The Naked Archaeologist.”

Talking today about Jesus having a wife and children is controversial, but in the centuries following his death, it was outright dangerous. Manuscripts and gospels that didn’t follow the Roman-sanctioned religion of the time were often destroyed, burned. Wilson believes that’s why the gospel was coded and translated into Syriac, a centuries old Christian language prominent in the Eastern Roman Empire, and given the nondescript label of: British Library Manuscript #17202. Followers of these other forms of Christianity would have done what they could to preserve their writings, says Wilson.

But this new evidence of Jesus’ marriage also brings out his human aspect, the sacredness of both marriage and sex within that union, says Wilson. “Mainstream Christianity in the second, third, fourth centuries really wanted to remove Jesus from his human and his Jewish and his family background. The idea that he might have a wife or that he would have kids or that he would have problems with in-laws or parents, a sick child while he has to go out and deliver the sermon on the mount, I mean, those are things that mainstream Christianity in antiquity and also today really didn’t want to deal with.”

The uncovered Syriac manuscript is some 1,450 years old and possibly older, dating to Jesus’ lifetime in the first century. Two covering letters were also discovered with it, which gave clues and context to what Wilson and Jacobovici would find in the text.

The Syriac manuscript came about after an anonymous person found an old Greek copy of the gospel in the library of the bishops of Aleppo in Syria and wrote to a friend, Moses of Ingila, asking him to translate it from Greek into Syriac as his own Greek language skills were rusty. But this same person also told his friend that he thought it was an important manuscript and may contain a hidden meaning. Moses of Ingila confirmed his suspicions and warned his friend to be careful as it was an important but dangerous manuscript that did contain a hidden meaning having to do with Jesus.

“So here we had some clues no other scholar had come across and that’s one of the most delightful things in research is seeing something for the first time,” says Wilson. “We had it translated by another York faculty member, Tony Burke, who is a Syriac scholar. We have one at York. Very few Canadian universities can boast that…. So we were able to come to grips with a manuscript that most other scholars and most other institutions really couldn’t deal with.”

On the surface, the manuscript tells the tale of Joseph and Aseneth, but Wilson says they “did something no scholar had bothered to do, which was to find out where is the oldest surviving manuscript, and it was in the British Library.” After much sleuthing and decoding, Wilson and Jacobovici realized it actually tells a very different story, one of Jesus and Mary the Magdalene. “We went back to sermons and theological writings from that culture and we discovered how they understood biblical writings,” says Wilson. There they found that “Joseph” was a symbol for Jesus and Asneth was a symbol for Mary Magdalene. “So we just followed the narrative and figured it out what they were getting at,” he says.

Coding was common at that time and in that culture. Even Jesus’ message of the Kingdom of God, as well as the Dead Sea scrolls, was coded. But to understand why this particular manuscript was coded, it is important to understand the political, social and cultural undulations of the time.

In addition to Burke, they also called in multispectral imaging experts to uncover words that had been blacked out or were illegible because of stains and smudges.

How the pair uncovered the true story of Joseph and Aseneth is as interesting as what they found it.

But Wilson hopes the book will provoke discussion. “Although Christianity has always said Jesus is both divine and human, our text says Jesus was divine and human, but then says, well, let’s concentrate on what it means to be human. So I see our book as a catalyst for that kind of discussion.” That human aspect goes to the heart of what Wilson and Jacobovici found one day in a dusty section of the British Library.