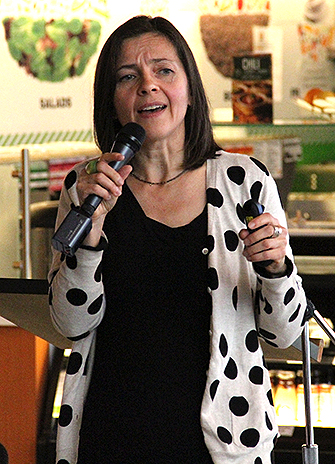 Researchers from four Faculties presented their research at the recent Building Healthy Lives and Communities Research Celebration, organized by the Office of Vice-President Research and Innovation, touching on everything from healthy aging and poverty to using technology to prevent bed sores.

The research celebration brought together York University professors with expertise in many different fields with a shared passion for health and improving the quality of life in the community. The talk took place on Nov. 24 in the lobby of the Lassonde School of Engineering where panellists addressed the question “How do we build healthier communities?”

“We look forward to the discussion addressing how we can build healthier communities and, in particular, building upon the concept of healthy lives and communities – one of our six core areas of comprehensive research strengths described in our strategic research plan that is helping us to further develop our national and international profile as a leading research institution,” said Robert Haché, vice-president research and innovation, in welcoming guests to the event.

“Health statistics will tell you what afflictions people have and the number of people who have them, but not the environmental causes,” said Ali. He cited the examples of mercury poisoning at Grassy Meadows Ontario, the tarsands in Alberta and the Sydney tar ponds in Nova Scotia caused by commercial and industrial activity aided by political decisions. To go forward, there needs to be an adoption of the precautionary principle, an example of which would see us move from our current polluter pays approach to a polluter proves approach, said Ali. He also called for the democratization of medical knowledge incorporating local, contextualized knowledge.

Pat Armstrong of the Department of Sociology spoke about healthy aging in residential places, specifically the need to develop a new definition of aging and healthy aging to include those who reside in long-term residential care. Long-term care facilities need to be more welcoming for residents by creating a home atmosphere, said Armstrong. This might include changing the way their food is served, creating roles for residents in their facility or finding different ways they can remain happy and healthy.

Armstrong said the use of music and dancing greatly helps residents by reducing their anger. She also says that creating an enjoyable mealtime experience is especially significant. “It is important to have appealing food and food encounters,” she said, citing other jurisdictions where residents do not wear bibs for a more dignified dining experience. Where feasible, other possibilities include serving meals in residents’ rooms or inviting other residents to set the table, which for some is a source of comfort as it reminds them of home.

Angelo Belcastro, chair of the school of Kinesiology and Health Science in the Faculty of Health, spoke about his research on using guided active play to increase physical activity in children. Belcastro uses self-paced games to establish physical activity trends in children. His research finds that the number of children meeting the daily requirements for daily activity is low.

His solution is to develop physical activity guidelines for children, and attempt to raise physical activity levels. Children are active for less than 25 per cent of physical education class, Belcastro said, and the level of intensity in community-provided programs is insufficient. To increase the amount of physical activity, kids need to enjoy it and be motivated to keep going with it. As part of Belcastro’s research, he runs a research-informed, guided active play program called “KIN Kids,” in which kinesiology and health science students develop the games with participating children and their parents. The program takes place at Driftwood Recreation Centre in the Jane and Finch community. Belcastro hopes to investigate the long-term effects and benefits of healthy active play, and follow up with children who have been in the program for years.

Andrew Eckford, an associate professor in the Department of Electrical Engineering and Computer Science, spoke about bringing new technology to the health community. His project, which he is the co-founder of, is called “Engage Biomechanics” and it uses wireless sensor networks to track posture and prevent pressure ulcers in bedridden patients. It would track residents’ movement patterns while sleeping and documents them for further study. This would not only help residents sleep more comfortably and prevent pain from ulcers, but it would also give staff members more information, through intervention prompts, compliance audit reports and performance analysis, he said. The wireless device would provide notifications to service workers and nurses if the resident had not been turned or repositioned on schedule. Eckford hopes to improve patient comfort, as well as make the job of staff easier.

Michaela Hynie, a psychology professor in the Faculty of Health and the associate director of the York Institute for Health Research, spoke about her work examining the processes of social exclusion and strategies to strengthen inclusion in different settings. Hynie explained that social exclusion may contribute to the “healthy immigrant effect.” That effect is one where immigrants come to Canada in a healthier state than the average Canadian, but over time their health deteriorates to average levels. Deterioration is greatest for those groups facing the greatest discrimination and exclusion, and for chronic diseases most associated with stress and poverty, such as diabetes and heart disease.

“Social support is one of the most important powerful, protective factors” and a key social determinant of health, she said, adding that a healthy community is an inclusive community. Hynie has been testing a model for immigrant and refugee integration that emphasizes the relationships between welcome by the larger social environment; measures of functional integration like language skills, employment and health care access; and subjective feelings of inclusion and belonging. With her colleagues in Rwanda, Hynie is also testing community level strategies to strengthen community integration and social support, in this case with new mothers, to reduce the prevalence, severity and impact of postnatal depression.

Geography Professor Valerie Preston spoke about diversity and social justice in Canadian communities. “Social justice,” Preston said, “means the needs of everyone are considered.” Approximately 46 per cent of Toronto’s population is foreign born – more than double that of Montreal – and that most immigrants live in suburbs such as Brampton, Mississauga and Markham rather than in the city. Looking at the demographic breakdown of the City of Toronto, Preston noted that most immigrant communities are living in the inner suburbs of Etobicoke and Scarborough where more poverty is concentrated, versus the more affluent neighbourhoods in central Toronto and along the Lakeshore. Toronto does a good job of social inclusion and has low crime rates but it does a lousy job of economic inclusion, particularly for those who are foreign born, she said.

“More than two million people live with diabetes in Canada. By 2020, 1,903,000 people will be diagnosed,” Riddell said. His research focuses on the effects that exercise can have on people who have been diagnosed with diabetes. He began by looking for people with pre-diabetes symptoms and recruited them to do a pen and paper questionnaire, followed by recruitment and screening. His aim was to put them in focus groups and aid them in supplementary physical activity for three months, where they participated in dance classes and other activities to remain active.

Riddell also runs diabetes sports camps to work with diabetic youth. The sports camp groups together non-diabetic children with diabetic ones, leading to awareness of diabetes and a reduction of stigma, as well as increased self-efficacy in the children. Picking up on a theme from professor Eckford and the use of technology in research, Riddell mentioned his work on developing an artificial pancreas involving a wearable wireless sensor system.

After the panellists presented their research, the event moderator, York’s Associate Vice-President Research Walter Tholen, welcomed questions from the audience and from the panellists, providing a broad perspective on how researchers and the community can join together to achieve a healthier future.