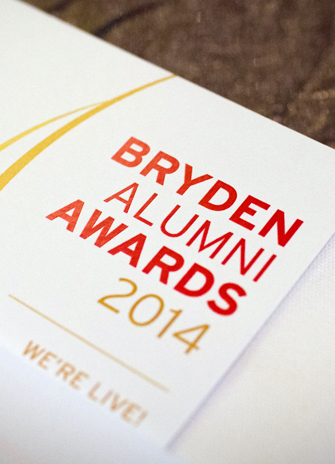 For Kofi Barnes (LLB ’91), the most valuable lesson he took away from his time at York University’s Osgoode Hall Law School was that anything was possible. “Every one of us has the capability to turn the impossible into the possible. When we begin to recognize and appreciate the incredible resilience of the human spirit, anything can be achieved.”

It was this unique sense of possibility that made the Ontario Superior Court of Justice Judge the ideal recipient of the Redefine the Possible Award at the 2014 Bryden Alumni Awards, where five exceptional York grads are recognized each year.

This year’s Bryden Awards were held on Thursday, Nov. 20 at the Royal Ontario Museum. The evening was sponsored by TD Insurance Meloche Monnex, MBNA Mastercard and Manulife, and was hosted by York grad and actress Rosemary Dunsmore (BA ’73). More than 300 guests attended the event and were treated to performances by the Ron Westray Jazz Ensemble, featuring Faculty of Fine Arts Professor Ron Westray on the trombone, and Turbo Street Funk, a six-person band who met while studying York University.

“Tonight, members from across the York community come together to recognize and honour five outstanding alumni who have attained extraordinary achievements and made remarkable contributions to York and to their communities,” said York’s President and Vice-Chancellor Mamdouh Shoukri. “As passionate York alumni and ambassadors, our Bryden recipients serve as role models and shining examples to current and future generations of York students. The exceptional trails they have blazed serve as proof that the possibilities after York really are endless.”

Barnes was recognized for his innovative, unconventional and daring leadership in the area of therapeutic jurisprudence, having founded Canada’s first drug treatment court and defined new ways for the law to support Canadians with drug addiction and mental health. He was joined by four other alumni at the 2014 event receiving awards based on their own unique contributions.

“It’s good to be home,” shared Irvin Studin (BBA ‘99, PhD ’11), recipient of the 2014 One to Watch Award. The award, which recognizes a relatively recent grad for his/her remarkable early achievements and eagerly anticipated future successes, is indeed fitting for Studin. In fewer than 15 years, he has distinguished himself as an author, lecturer and one of Canada’s foremost experts on foreign policy and national security. “York University is a project en route to incredible things. I salute our current leaders for bringing us to this pivotal point, and I have all the faith in the world that our future leaders will carry York’s vision to new heights.”

The Pinnacle Achievement award is presented to a graduate who has achieved distinction in their field and whose integrity and ability inspires alumni, faculty, staff and students. And it was clear as renowned particle physicist Nigel Lockyer (BSc ’75) took to the stage to accept this award that he has no intention of slowing down any time soon. “It is important to find something you enjoy, stick to it and work hard at it – and if it’s truly something you enjoy, it won’t seem like work at all.”

A graduate of York University’s Physics and Astronomy department, Lockyer is widely recognized as one of the world’s preeminent experimental particle physicists. In 2006, he received the Panofsky Prize for his leading research on the bottom quark, one of the universe’s vital building blocks, and has since taken up post as director of the internationally renowned Fermi National Accelerator Laboratory.

And while some recipients were recognized for their work on the world stage, the 2014 Bryden Awards proved York grads were also making incredible things happen right here at York.

Local Hero recipient Sonia Cianfarani (BA ’96) shared with guests how she uses her own experience as a York grad to build educational pathways for generations of incoming students and future alumni as a York recruitment officer. “The University was my lifeline and I cannot imagine where I would be without the experience and knowledge I gained on this campus. To know York is to love it – and I am privileged to be able to help new students know York as well. I am grateful to be in a position where I can help young people begin their journeys and I look forward to celebrating them as future Bryden recipients one day.”

This year’s final Bryden Award recipient Samuel Schwartz (MA ’69, LLB ’72) put his role as passionate York ambassador to work as he stepped up to the podium to accept the Outstanding Contribution award.

“York University is a tremendous institution that makes a difference in every quadrant of Canadian life and speaks to diversity on a day-to-day basis,” Schwartz exclaimed. “York is nurturing Canada’s future leaders, so I know our country is in good hands – and we as alumni need to do our part as well. Get involved with your alma mater, be a mentor and provide guidance to York students – I have no doubt that it will make a difference.”

Among the guests in attendance were Julia Foster, chair of York’s Board of Governors, and Jeff O’Hagan, vice-president advancement, both took to the stage to share their excitement with the night’s recipients. “Like the Bryden recipients before them, our 2014 recipients encourage all of us to do our best, work hard and contribute to a better world,” O’Hagan said. “Thank you and congratulations to all of our Bryden recipients – we hope that you’ve enjoyed the spotlight tonight because you deserve it!”

As the event came to a close, Randy Williamson, chair of the York University Alumni Association, congratulated this year’s winners and turned everyone’s thoughts towards next year’s

ceremony. “Planning has already begun on next year’s ceremony and we’ll need your help to discover other York grads from our growing community of more than 275,000 alumni that deserve to be recognized.”

If you know of a York graduate who is making an outstanding impact and deserves to be recognized with a Bryden Alumni Award, e-mail bryden@yorku.ca. To see more images from the evening, visit the Bryden Photo Gallery Facebook page.