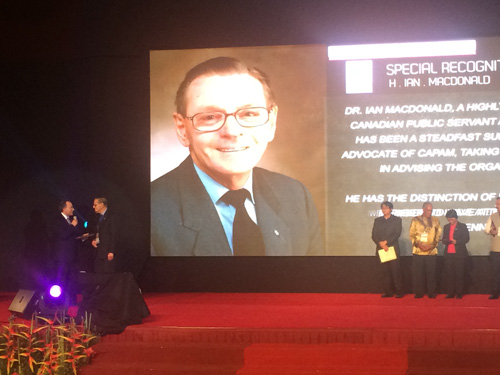 President Emeritus H. Ian Macdonald has just returned from Malaysia, where he delivered two papers to the Biennial Conference of the Commonwealth Association for Public Administration and Management (CAPAM).

There were more than 750 registrants at the conference, both academics and public servants, from across the Commonwealth.

Macdonald was also presented with a special award, in honour of CAPAM’s 20th anniversary, as a founding member of the organization and in recognition of his support, informative contributions and advice over the intervening years.  This was the first such award by CAPAM to an individual.

An economist and academic who has held senior posts in the Ontario government, Macdonald was York University’s third president & vice-chancellor, serving from 1974 to 1984. Currently, he is the program director of the Master of Public Administration Program at York’s Schulich School of Business.

Among his many honours and awards, Macdonald has received a Rhodes Scholarship, Vanier Medal for Public Service, Citation of Merit from the Court of Canadian Citizenship, Award of Merit from the Canadian Bureau for International Education, Governor General’s Medal, the President’s Award of Recognition from the Simcoe Chapter of Lambda Alpha International: The Honorary Society for the Advancement of Land Economics, the Commemorative Medal for the 125th Anniversary of Canadian Confederation and Queen’s Golden Jubilee Medal. In addition, Macdonald is an officer of the Order of Canada and a Knight of Grace of the Order of St. Lazarus of Jerusalem.