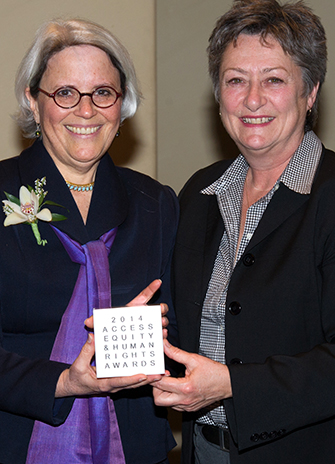 Anne Rochon Ford, co-director of the National Network on Environments and Women’s Health at York University, was recently honoured with a 2014 Constance E. Hamilton Award at Toronto City Hall.

“It is a remarkable thing that we live in a city that recognizes and rewards all of us here for work which, in other eras and in other parts of the world, we might be jailed,” said Ford in her acceptance speech Wednesday, Nov. 26.

The Constance E. Hamilton Award recognizes the significant contribution of recipients to securing equitable treatment for women in Toronto – socially, economically or culturally. The award commemorates the Privy Council decision of 1929, requiring the federal government to recognize women as “persons” according to the terms of the Constitution Act, 1867.

Ford was one of three winners of this year’s award. She won for her quiet, steady and forceful championing of women’s health in Toronto and across Canada with a long history of advocacy and activism. As a founding member of Willow Breast Cancer Support and Resources Services in 1994, Women and Health Protection in 1997, the Toronto Women’s Health Network in 1981, the Ontario Women’s Health Network in 1997 and DES Action Toronto in 1984, Ford has shown commitment and vision for an inclusive women’s health agenda.

“It is very special and meaningful to me that the city specifically recognizes women with this award and that in so doing it honours the trailblazing force of Constance Hamilton, the first woman elected to City Council,” said Ford, executive director of the Canadian Women’s Health Network. “As one who tends to work behind the scenes, I am touched that the city has chosen to recognize the years of work I have done in women’s health.”

In both her professional and volunteer lives, Ford has demonstrated a lifelong commitment to ensuring that women are not further harmed by environmental chemicals, a situation that can have not only serious health effects, but a lifelong impact. She has worked tirelessly to help establish strong women’s reproductive health programs and choices, such as the midwifery program now in place across Ontario. She has also sat on the Ontario Advisory Council on Women’s Issues (1986-88) and the Interim Regulatory Council on Midwifery (1991-92).

But looking back recently at some of the projects she has been involved with, Ford said, “I was shocked – no, actually, deflated might be the more appropriate word – to see how we are still fighting for so many of the same things.” She gave the example of Ontario having regulated midwifery in the mid-1990s, something Ford said was a good thing, but went on the say that despite that, “for the most part, we have more technological intervention in childbirth than we have ever seen, with almost one-third of all births occurring by C-section”.

Ford pointed out the Constance Hamilton fought hard to secure the right for women to be elected into public office in Toronto and many more women have fought for further advancements, yet today “women are taking anti-depressant and anti-anxiety medication at unprecedented rates to cope with the stresses of everyday life.”

And breast cancer, especially in younger women, is on the rise and increasingly it points to environmental causes, she said. “I point out these examples in women’s health because they are happening against a backdrop of relentless cutting back of women’s health organizations in this country, and a silencing of the scientists and researchers who are naming many inconvenient truths. While there are good news stories to celebrate, these bad news stories point to the need to continue to do the work that we do.”

As a writer, Ford has edited and authored several important publications, including The Push to Prescribe: Women and Canadian Drug Policy (2009) and Access to Midwifery: Reflections on the Ontario Equity Committee Experience, in Reconceiving Midwifery (2004). For the DisAbled Women’s Network of Ontario, Ford wrote a booklet for health-care professionals about making their practices more accessible to women with disabilities (1993). On the occasion of the 100th anniversary of the admission of women into the University of Toronto, she authored A Path Not Strewn with Roses: 100 Years of Women at University of Toronto, 1884-1984 (University Press, 1984).

She continues to champion women’s health in her current roles and through research on the impact of toxins in the workplace, environmental causes of cancer and the influence of alcohol on young women. Her most recent work involves studying the environment that nail salon staff work in and the impact that has on their health. Her work continues to raise awareness and understanding, as well as demanding strong policy responses from various levels of government.

Hamilton, born in England in 1862, migrated with her family to Canada in 1888. She publicly championed many causes. A strong fighter for women’s suffrage, she became president of the Equal Franchise League of Toronto and frequently represented Canadian suffragists in other countries. When women secured the franchise and were eligible to run for municipal office, she became the first woman elected to City of Toronto Council.