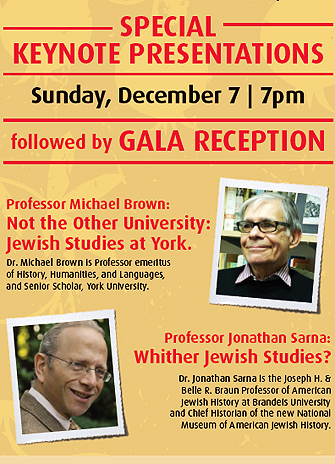 The Israel and Golda Koschitzky Centre for Jewish Studies at York University will celebrate its 25th anniversary with a two-day international symposium delving into the state of Jewish studies.

The State of Jewish Studies: Perspectives on Premodern Periods will take place on Sunday, Dec. 7, and Monday, Dec. 8. Visit the Israel and Golda Koschitzky Centre for Jewish Studies website for times and locations. Everyone is welcome to attend. For lunch on Sunday and Monday, pre-register by Dec. 1 at cjs@yorku.ca or ext. 55823. It is free for students and faculty, and $10 per lunch for the general public.

“Over the course of the past quarter-century, York’s Koschitzky Centre has established itself as Canada’s preeminent centre for Jewish studies and as one of the world’s leading ones. Thus, it is most appropriate for us to celebrate our silver anniversary by hosting an international symposium that examines how the interdisciplinary field of Jewish Studies has changed and developed over the course of the last generation, and what its prospects are for the future,” says York Professor Carl S. Ehrlich, director of the Koshchitzky Centre.

“To do this we are bringing together many of today’s leading scholars in the field, both established and emerging, to engage in two days of intense exchange and discussion, the end product of which will be a volume that should serve as the basic handbook in the field over the next few years.”

York University history, humanities and languages Professor Emeritus Michael Brown will deliver the talk Not the Other University: Jewish Studies at York, one of two keynote presentations Sunday, at 7pm. Jonathan Sarna, the Joseph H. & Belle R. Braun Professor of American Jewish History at Brandels University and chief historian of the National Museum of American Jewish History, will deliver the second keynote the same evening, titled Whither Jewish Studies?. Both will be presented at the Robert R. McEwen Auditorium, Executive Learning Centre, Seymour Schulich Building, Keele campus. A gala reception will follow the keynote addresses.

The conference will also feature several panel discussions focusing on the history and society; texts and literature; art, archaeology and architecture; and religion, theology and thought during five different time periods of Jewish history.

The five panels will be as follows:

To keep the logistic challenges of mounting such a symposium within manageable bounds, Ehrlich says they are devoting this event to the premodern periods. “In a year from now, we will be hosting a followup symposium dedicated to the State of Jewish Studies: Modernity and Methodology,” he says.