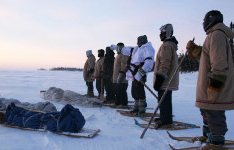 Cinemas across Toronto featured the 15th annual Planet in Focus Film Festival from Nov. 6 to 9. The festival, of which York’s Faculty of Environmental Studies (FES) is one of the co-sponsors, brought pressing environmental and political concerns to audiences.

The film festival has intimate ties with York University, and particularly the Faculty of Environmental Studies. Perhaps most notably, the festival itself was founded by Mark Haslam, who completed a master in environmental studies and a master of fine arts at York in 1999 and 2000, respectively. Furthermore, this year, FES alumna Tzeporah Berman, who graduated in 1995, was named the 2014 Canadian Eco-Hero for her work in environmental activism.

Stiegman’s film highlights the lives of the Algonquins of Barriere Lake, who have been struggling against the government of Quebec since the late 1980s. The film focuses on their resistance against provincial and federal resource policies, and the appropriation of un-ceded indigenous land.

In 1991, the Algonquins of Barriere Lake signed a trilateral agreement with the provincial and federal governments, which would have protected their traditional lands and implemented revenue sharing programs, yet it was never instituted. Stiegman’s film presents an intimate glimpse into a community persevering despite oppressive police presence and resource politics.

In stark contrast to the intimacy of Stiegman’s Honour Your Word, Obomsawin’s Trick or Treaty manages to capture the massive scale of the Idle No More movement, as well as the vast geopolitical effect of Treaty Number Nine.

The treaty, which covers more than half of Ontario and some of Manitoba, has had dramatic implications upon the lives of indigenous people in Northern Ontario. Obomsawin’s Trick or Treaty was selected for the imagineNATIVE Film and Media Arts Festival’s Audience Choice Award earlier this month.

As Ravi de Costa suggested in his introduction to Obomsawin’s film, the Planet in Focus “festival has a commitment to telling indigenous stories.” Certainly the films by Stiegman and Obomsawin evidenced this fact.