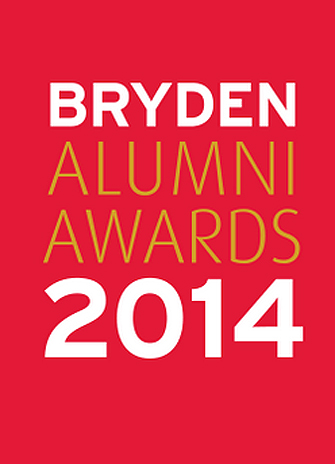 Each year, the Bryden Alumni Awards celebrate five outstanding grads who have achieved the extraordinary and made remarkable contributions to York University and the community. The five leaders who will be honoured Nov. 20 at an awards dinner at the Royal Ontario Museum are:

“With each new group of Bryden recipients, we are reminded of the endless possibilities that come with a York education – and this year’s recipients are no exception,” says James Allan, executive director of York’s Community and Alumni Relations office. “Like Bryden recipients before them, our 2014 honourees inspire all of us to do our best, work hard and contribute to a better world. Their outstanding achievements and leadership make York what it is today and encourage the entire York community – students, staff, faculty, alumni and friends – to reach even higher.”

Sponsored by TD Insurance Meloche Monnex, the awards are named after the late Bruce Bryden (BA ’64), founder of the York University Alumni Association and the first alumni chair of the York University Board of Governors. A passionate member of the community for nearly 30 years, Bryden’s inspiring commitment, vision and contributions helped shape York into the vibrant and innovative university it is today.

There are five categories of Bryden Alumni Awards, each of which honours a distinct set of achievements and contributions:

Pinnacle Achievement: Recognizing true distinction in professional life or in any field of endeavour.

For more than 30 years, Nigel Lockyer (BSc ’75) has enjoyed a successful career in the field of high-energy particle physics. A graduate of York University’s Physics and Astronomy program in the Faculty of Science, Lockyer is widely recognized as one of the world’s pre-eminent experimental particle physicists.

In 2013, Lockyer began his tenure as director of the internationally renowned Fermi National Accelerator Laboratory. Prior to this appointment, Lockyer spent more than two decades as a professor at the University of Pennsylvania, researching high‐energy particle physics and the application of its technologies to medicine. In 2005, Lockyer became the director of TRIUMF, Canada’s national laboratory for nuclear and particle physics, where his leadership took the lab to the forefront of nuclear physics on an international scale.

Lockyer holds a BSc from York University, a PhD in physics from Ohio State University, is a fellow of the American Physical Society and received the 2006 Panofsky Prize for his leading research on the bottom quark.

Outstanding Contribution: Dedication to the advancement of the University through exceptional service, commitment and contributions.

Over a remarkable 40-year career, Samuel Schwartz (MA ’69, LLB ’72) has been guided by a commitment to his community with a focus on giving back in the areas of education, health care and community empowerment.

A tireless York ambassador, Schwartz became a member of the University’s Board of Governors in 2002. During his 12-year board tenure, he served as a member of the Senate and as chair of York’s Academic Resources Committee, directing board oversight in the creation of the Faculty of Liberal Arts & Professional Studies. In recognition of his outstanding contributions, he was named an honorary governor of the board this past June. Schwartz’s other volunteer contributions include being a Mount Sinai Hospital Foundation board member and a Canadian Cancer Society national campaign cabinet member.

A corporate lawyer specializing in financing and intellectual property, Schwartz’s professional career has included building boutique law practices as well as holding senior leadership positions in regional and national law firms. He is currently managing partner at the Toronto office of Davis LLP.

Redefine the Possible: For leadership and successes which are innovative, unconventional and daring, embodying the theme of redefining the possible.

First appointed to the Ontario Court of Justice in 2004, Justice Kofi N. Barnes (LLB ’91) is known as a pioneer and innovator in jurisprudence and champion of social justice. Barnes came to Canada from Ghana and attended Trent University before enrolling at York University’s Osgoode Hall Law School. He was appointed a judge of the Ontario Superior Court of Justice in 2013.

Barnes has been the recipient of many prestigious awards including the Queen Elizabeth II Silver Jubilee Medal, the Trent University Distinguished Alumni Award and the African-Canadian Achievement Award for Excellence in Law.

Local Hero: A York alumnus and employee of the University who has gone beyond the call of duty.

Sonia Cianfarani (BA ’96) has been an integral member of the York University community for more than 16 years. After completing her BA in sociology in 1996, Cianfarani joined the Admissions Office as a full-time employee, building on her time in that department as a work-study student. Five years later, she transitioned to the Recruitment Office where she took on the important role of student recruitment officer.

Dedicated to her work and passionate about the mission of the University, Cianfarani provides support to a diverse range of people, including mature, high-school and transfer students, helping them to successfully navigate their educational journeys at York. She guides students and encourages involvement in customized student support programs such as Fall Campus Day, Spring Open House and fast-track recruitment events. An active member on four college committees, she serves as an invaluable resource for expert and practical advice on improving enrolment and associated programs. She also shares her knowledge and enthusiasm as an annual lead presenter at the Ontario Universities Fair, Canada’s largest high school-targeted event promoting university education.

One-to-Watch: For remarkable professional and community accomplishments early in his or her career.

In fewer than 15 years, Irvin Studin (BBA ’99, PhD ’11) has distinguished himself as an author, lecturer and one of Canada’s foremost experts on foreign policy and national security. He is editor-in-chief and publisher of Global Brief magazine and president of the Institute for 21st Century Questions, a vision and strategy think-tank launching this fall.

Between 2009 and 2014, Studin served as program director, master of public policy program, and as an assistant professor at the University of Toronto’s School of Public Policy and Governance. He is the co-founder of Ukraine’s Higher School of Public Administration and a professor at Russia’s Academy of National Economy and Public Administration. Studin has worked in the Privy Council Office in Ottawa and in Australia’s Department of the Prime Minister and Cabinet in Canberra. The first recruit of the Canadian government’s Recruitment of Policy Leaders program, Studin co-authored Canada’s 2004 national security policy and principal-authored Australia’s 2006 policy on national counter-terrorism.

Studin holds degrees from the Schulich School of Business, the London School of Economics and the University of Oxford, where he studied on a Rhodes Scholarship. His PhD is from Osgoode Hall Law School, where he was a Trudeau Scholar and earned the Governor General’s Gold Medal. An all-Canadian athlete, Studin was inducted into York University’s Sports Hall of Fame in 2012 for his achievements in soccer, including his role as captain of the varsity team during his time at York.