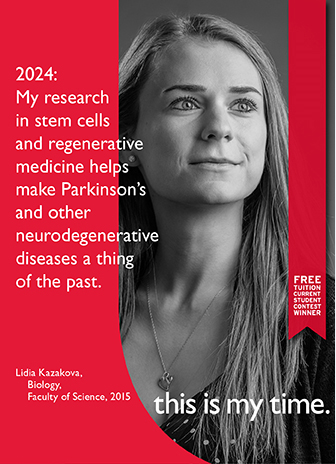 Seven years ago, when Lidia Kazakova moved from Russia to Canada, she had no idea that she would become one of the lucky few to find her true vocation, one grounded in passion. Now enrolled in her fourth year in the honours Biomedical Science program in the Faculty of Science at York University, Kazakova is realizing her dream and is charting a future as a researcher in the emerging area of regenerative medicine.

When news broke that York University was asking current students to articulate their visions for their futures as part of the University’s “this is my time” brand campaign and submit their visions to an associated contest with a grand prize of free tuition for one year, Kazakova decided to enter. She found the brand campaign’s concept, of thinking about what her future would be, to be fascinating.“I think it is a really interesting idea to imagine yourself some years from now and to envision what you actually will be doing. I just think it is so inspirational,” she says.

In constructing her entry into a single sentence, Kazakova decided to merge her desire to help those in need and her passion for research with her interest in regenerative medicine. “My vision that I submitted was that by the year 2024, my research into stem cells and regenerative medicine will be making Parkinson’s and other neurodegenerative diseases a thing of the past,” she says.

On Monday, York President and Vice-Chancellor Mamdouh Shoukri, accompanied by a camera crew, walked into her lecture hall to surprise Kazakova with the news that her vision had been selected as the winning entry.

“I had absolutely no idea,” she says, admitting that she was completely dumbfounded when the president read out her vision. The prize will certainly come in handy, she says, as she is planning to do an extra semester to prepare for graduate studies, which she hopes to pursue at York University.

“With thousands of visions to assess, the judging committee was struck by a common thread among them all and that is the authentic desire of York U students to turn their passion into action as they look to make a positive impact on society upon graduation,” says Susan Webb, chief communications and marketing officer, York University. “Our students truly reflect our brand and share our value of social responsibility. Lidia’s vision is a great example.”

Kazakova credits her family, her professors and studies in the Faculty of Science, and her work with the non-profit student club known as the Canadian Association for Research in Regenerative Medicine (CARRM), which is affiliated with the McEwan Centre for Regenerative Medicine at the University Health Network, for inspiring her vision.

“My father was a professor of chemistry and physics in Russia and my grandmother was a doctor,” she says. “I was always fascinated by science, so when it came time for university, I decided that I wanted to study biology and biochemistry because I find both so interesting.”

A top student in high school in her adopted home town of Richmond Hill, Ont., Kazakova says she did “a ton of research” into different universities when she was considering her postsecondary options. She had her pick of offers and decided to attend York University after she went on a tour of the Keele campus. “I visited all of the facilities and I spoke to the people at York University. What came through to me was a sense that people at York University really want you to succeed and have a very positive attitude,” she says.

“I did not feel this as much at the other universities I visited and felt more like I was fitting into a plan they had for me,” explains Kazakova. “At York University, there was more flexibility and the opportunity for me to realize the plan I had for myself and the full potential of what I wanted to do.” This, she says, has had a great impact her life and she has never looked back.

“When I first entered university, I knew that I liked biology, but not much more than that. At York University, I learned about the different areas of biology and it was thanks to York that I even learned about regenerative medicine in the first place,” says Kazakova. “All the lab experience, the hands-on experience, it has been absolutely incredible. It is one thing to learn about it in books, but it is another thing to actually try it out in the lab.”

She credits York biology Professor John McDermott and his love for teaching for igniting her own desire to pursue a career as a researcher. “I took his fourth-year course in developmental biology,” she says. “It was one of the most memorable experiences because he spoke with such passion about his subject material. He made me want to become a professor.”

What became clear to her was that to be successful, passion was vital. “Many people go to university just so they can earn lots of money. I think it is important to think about what you love because you will be doing it for the rest of your life. When it is something you love, there is no problem with motivation and that is how you will succeed; it is the only way,” she says.

She hopes to eventually complete her doctorate in regenerative medicine and has decided to focus on research as a career because of the potential of discoveries to help millions.

Would there be anything that she would change? “I would have joined a club earlier,” she says. “I have been a member of CARRM for just over a year. Before that, I was focused solely on my grades. I went to class, I studied at the library, I went home, and I worked almost full time at a job and volunteered at the hospital. That was it.

“I did not realize how much I was missing out by not being part of the community that is York University. I did not realize that I was missing out on meeting new people, working to raise awareness about an issue that I care deeply about. I did not think that I had any power to make change,” she says. “I have learned so much from networking with other students and the field of regenerative medicine. I feel that I am, and will be able to, really make a difference.”

The goal of the contest was to celebrate the ambition and goals of current York University students. “Every day, and in every field, we celebrate past and future York U graduates who are taking on the challenges of today’s global economy,” says Webb, highlighting that each Faculty has also selected a top vision (listed below).

Arts, Media, Performance & Design
2026 : My design firm has revolutionized way finding so everyone, abled and disabled, can make their way to their destination with ease. Amanda Theyers

Glendon
2039:  As a clinical psychologist, I have decreased the suicide rate in Canadian prisons in half by introducing effective rehabilitation programs. Ahalya Kathirkamanathan

Graduate Studies
2027:  My research team will commercialize the first car consuming hydrogen as a clean fuel instead of fossil fuels. Mohammad Nazari

Osgoode Hall Law School
2031: As a delegate to UNESCO, I ensure the protection of cultural heritage through the reduction of illegal trafficking of cultural properties. Stephanie Kolla

Schulich School of Business
2036:  As CEO of a non-profit organization, my Girls Teaching Girls project will successfully shrink the global illiteracy rates of women by 20%. Tasnin Reza

Secondary prize winners were drawn at random from the entries and the winners of $1,000 tuition credits are Monica Faheim from the Schulich School of Business and Gary Kaplun from the Faculty of Education.

To view the thousands of inspiring visions provided by current York U students, visit the “this is my time” website.