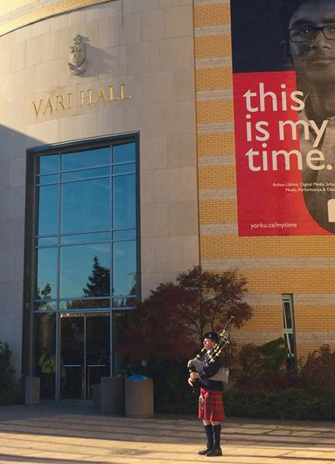 It was an unusually warm day and the bright sunshine illuminated the University’s Remembrance Day ceremony on Nov. 11.

At the Keele campus, more than 1000 community members gathered at the flagpole in the Harry W. Arthurs Common. The ceremony saw the lowering of the flag to half mast, readings of important poems and passages from traditional texts, and the laying of wreaths. It began with the processional led by Brian Urkosky, a pipe major with the Toronto Police Pipe Band, who led  faculty, staff and students out of the Vari Hall Rotunda to the flagpole on the Harry Arthurs Common. Joining the York community in the processional and for the service were children from the York daycare. Members of Canadian Forces 32 Canadian Brigade Group served as the Remembrance Day honour guard.

Rhonda Lenton, provost and vice-president academic, welcomed faculty, staff and students to the ceremony. Lenton paid special tribute to the two fallen soldiers who lost their lives on Canadian soil due to acts of terror before asking York President and Vice-Chancellor Mamdouh Shoukri to speak.

“Today, we come together in solemn commemoration of millions of brave Canadian military men and women, who have served and continue to serve, our great country both at home and abroad and who protect our freedom at great cost,” he said.

“Our nation was recently reminded of this cost less than one month ago when two members of the Canadian Armed Forces tragically lost their lives in attacks taking place in Ottawa and Quebec. Cpl. Nathan Cirillo and Warrant Officer Patrice Vincent joined hundreds of thousands of Canadian solidiers who have died as members of the Armed Forces,” he said. “Today we express our deepest condolences to their families and loved ones, and recognize the ultimate sacrifice they made while protecting our country.”

York University Chancellor Gregory Sorbara recited the “Anthem for Doomed Youth” by Wilfred Owen (March 18, 1893 to Nov. 4, 1918). Owen was an English poet and soldier, one of the leading poets of the First World War. His war poetry captured the horrors of trenches and gas warfare.

Lieutenant-Colonel Allan Best, (BA Spec. Hons. ’97), the commanding officer of the 48th Highlanders of Canada, was invited to deliver remarks on behalf of the Canadian Armed Forces. “Today we are going to speak about what is on everyone’s mind, what happened in Ottawa more than two weeks ago. I want everyone to please reflect on the content of our character as a nation and I mean that as sincerely as someone who has served overseas,” he said. “Canada shares a distinction with only two other nations Australia and New Zealand in that the bulk of our war dead are buried on foreign soil. We have not known violent conflict in terms of war on our soil for decades if not over a century and a half. We who are in uniform are prepared to bleed, we will bleed for you. We have bled on foreign soil but we were not expecting to bleed at home.

“Having said that, it is deeply humbling to watch the outreach that has occurred across this entire country. Lone individuals standing at monuments throughout the nation, individuals coming forward, as they did that day at the Tomb of the Unknown Soldier, to come to the aid of Cpl. Cirillo. I had privilege last night of meeting with Lieutenant-Colonel Lawrence Hatfield, commanding officer of The Argyll and Sutherland Highlanders of Canada, who was Cpl. Cirillo’s commanding officer, who held the hand of Cpl. Cirillo’s young five-year-old son at the cemetery,” he said, choking back tears.

“I asked him if there was a message that I could pass on to you today and this is what he said. ‘Alan, there is no greater calling than education. There is no greater message to a society than to learn analytical and critical thought and to ask those fundamental questions of why? Not to blindly follow the lead, but instead to ask why.’ “To those of us who wear the uniform, we may not like what an individual has to say but we will absolutely defend your right to say it. And if there is one way for all of us to express our thanks, then it is to go and vote, exercise that right, whether it is a municipal, provincial or federal election, you go and cast that ballot, even if you spoil that ballot, you cast it,” said Best. “Every ballot we cast has blood on it and that, ladies and gentlemen, is the content of our character.”

The children of the York University Co-operative Daycare sang “The Poppy Song” and the ceremony concluded with “God Save the Queen”.