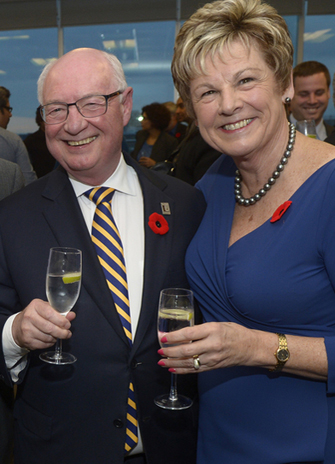 Longtime University advocates James and Joanne Love have donated a landmark $2.5 million in support of environmental sustainability at York University’s Faculty of Environmental Studies (FES) and the Lassonde School of Engineering. The gift was announced before more than 70 guests at a Nov. 5 reception held in the Kaneff Tower on York’s Keele campus.

The gift will go towards establishing the James and Joanne Love Chair in Environmental Engineering at Lassonde and completing the funding for the Chair in FES that will now be known as the James and Joanne Love Chair in Neotropical Conservation. Additionally, their gift will provide major funding to endow the Fisher Fund for Neotropical Conservation, named to honour James’s good friend Woody Fisher, a tireless supporter and champion of the Las Nubes Project in Costa Rica.

“We are incredibly grateful for this contribution, which will help York to continue to advance its leadership in environmental sustainability – in teaching, research and in practice,” said York President and Vice-Chancellor Mamdouh Shoukri.

Building on the many contributions that the Loves have made over the years, this most recent gift brings their total giving to York to $3.5 million and, when combined with matching funds from the University, brings the total impact of their support to $5 million.

James, who currently serves as chairman and CEO of Legacy Private Trust, shared with guests how their latest gift came to be. “The University has a world-class reputation, primarily in the arts and humanities, and President Shoukri, along with the Board of Governors, has set a strategic focus on building science, engineering and environmental sustainability at York. With this in mind, we decided to support areas of the utmost importance to York’s future and proposed a gift with an impact that could be shared across the University,” he said.

Both Noël Sturgeon, dean of the Faculty of Environmental Studies, and Janusz Kozinski, dean of the Lassonde School of Engineering, took to the stage at the Nov. 5 event to acknowledge the impact of the Loves’ support for their Faculties.

“The rainforests are the lungs of the world and preserving them is vitally important,” Sturgeon explained. “The James and Joanne Love Chair of Neotropical Conservation and the endowment of the Fisher Fund will allow us to increase our support for students learning about conservation and biodiversity through field courses, faculty research and the local community in the Las Nubes area. We are deeply indebted to the thoughtfulness and generosity of the Love family.”

Kozinski added that “solving great challenges like climate change, water security and energy preservation will take more than technical talent alone. The world needs engineers with passion and perspective, or as we call them ‘Renaissance engineers,’ who value the world around them and truly understand the impact of their activities on the global environment. The James and Joanne Love Chair in Environmental Engineering at Lassonde promises to establish our school as a leader in this ever more vital field of research.

“Our students enter a very different kind of engineering school, where we learn to better understand not only engineering, but politics, religion, poetry and literature. What we don’t have is a program in environmental engineering that allows us to better understand how the world outside operates,” continued Kozinski. “This new investment will let us focus on new areas like water security, developing new smart technologies that reflect the needs created by climate change and green infrastructure.”

Over the past several decades, James, a graduate of York’s Osgoode Hall Law School in 1973, has contributed to the advancement of the University through exceptional service, commitment and major philanthropic contributions to a number of initiatives, with a specific focus on environmental sustainability and conservation. Not only has he distinguished himself as highly respected and accomplished lawyer by trade, but he is well known as a committed and enthusiastic York ambassador and volunteer.

He currently sits on the York University Foundation Board and is a member of the President’s Advisory Council on Advancement, and has personally secured a number of major donations. He has also been involved for many years with the Fisher Fund Wine Tasting and Auction event, which is an annual highlight for York University that has contributed more than $1.2 million to the Las Nubes Project.

His outstanding contributions to the University were recognized with a 2010 Bryden Alumni Award.

James concluded his remarks by thanking York for their recognition. “We won’t forget this day and we won’t forget York,” he said. “And both Joanne and I hope there will be many more people who decide they want to contribute to the future of the University.”