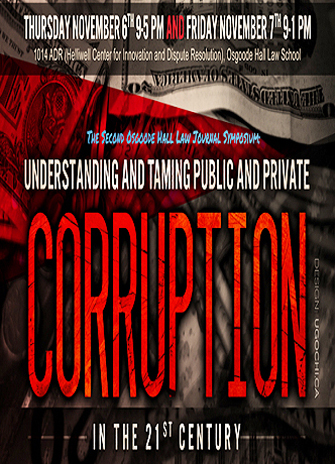 York University’s Osgoode Hall Law School will host a major conference that will look at corruption in business, finance, government and enforcement.

Understanding and Taming Public and Private Corruption in the 21st Century will take place Thursday, Nov. 6, from 9am to 5pm, and Friday, Nov. 7, from 9am to 1pm, at 1005 Moot Court, Ignat Kaneff Building, Osgoode Hall Law School, Keele campus.

The conference will bring together top Canadian and international legal, political and media experts to explore what makes these sectors vulnerable to corruption, the systems that undermine anti-corruption intentions, and the failures of transparency and accountability efforts.

“Corruption is not only a major problem for developing countries, it is also a critical issue for Canada in 2014,” said Professor François Tanguay-Renaud, director of Osgoode’s Jack & Mae Nathanson Centre on Transnational Human Rights, Crime and Security, which is hosting the conference in partnership with the Osgoode Hall Law Journal.

“In the past few years, there have been many disturbing high-profile cases of corruption that have garnered considerable media attention, generated public inquiries and led to unprecedented court cases,” Tanguay-Renaud said. “These events have demonstrated that no level of government, agency or corporation is immune from corruption schemes. This conference will reflect critically on some of those experiences and responses to them.”

Key themes that will be explored at the conference include:

The keynote speaker will be John Sandage, director of the UN Office on Drugs and Crime’s Division for Treaty Affairs. In addition, leading thinkers on corruption will participate in panel discussions that will analyze recent domestic and transnational events in Canada and abroad from a wide variety of cutting-edge legal, sociological and political perspectives, and propose constructive ways forward.

Among the speakers, Julian Sher, senior producer at CBC’s “the fifth estate,” and John Ibbitson and Adam Radwanski, both of the Globe and Mail, will present on the media’s role in exposing corruption and responsibilities of the media generally to accurately report levels and types of corruption.

To register, fill out the registration form.