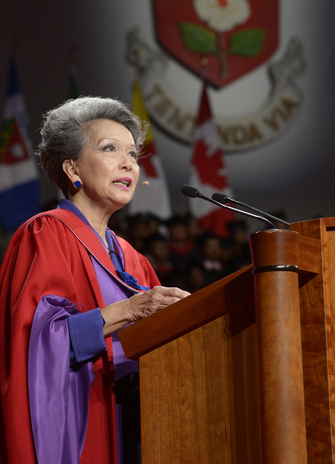 A woman of many talents, Vivienne Poy has made a name for herself in Canadian politics, academia, fashion and the Asian Canadian community.

As the first Canadian of Asian descent to be appointed to the Senate of Canada from 1998 to 2012, Poy championed many initiatives, including Asian Heritage Month. A trendsetter well ahead of her time, Poy, now retired from the Senate of Canada, was at York University on Oct. 16 to receive an honorary doctor of laws degree during Fall Convocation ceremonies. She was honoured by York University for her work as a volunteer and success as a business leader.

In addition to her role in Senate, Poy served as chancellor of the University of Toronto from 2003 to 2006 and prior to that founded and very successfully operated the fashion design company Vivienne Poy Mode. While at the helm of her dynamic fashion business, Poy actively gave back to society and her community. She was a board member with the Kidney Foundation of Ontario, honorary adviser to the Japanese Canadian Legacy Project, honorary patron of the Chinese Cultural Centres of Greater Toronto and Greater Vancouver, and was the patron of the Centre for Information and Community Services.

She told graduands of the Faculty of Liberal Arts and Professional Studies that throughout her life she has been guided by hard work and a desire to excel, both of which she said are important qualities in success. “I believe that we always need to do what we like, work hard and excel and in the meantime, while enjoying our work and giving back to society, we may come to be noticed by others and interesting things can happen in our lives,” she said referring to her appointment to the Senate of Canada.

Growing up in Hong Kong, Poy explained that she was the “number three daughter” in a prominent Hong Kong family, and this birth position allowed her the freedom to explore her passions in history and art. “I was lucky to be born a daughter and number three in my family. In a Chinese family, that was a very safe position to be in because there were no expectations from my parents!” she said.

“I was left alone to thrive, which suited me just fine. There was no interference into what I wanted to study in university. I graduated with an honours BA in history,” she said. “My first degree got me interested in books on history, biographies, autobiographies and later in life, led to writing and my postgraduate degree in history. My love of painting and interest in colours and forms led to my studying fashion design.”

“What does success mean to you?” she asked graduands of the Faculty of Liberal Arts and Professional Studies. “Today, all of you are successful and I am sure that success is on your mind and right now, success is getting that job you want and making money.

“I hope that you all do well in that regard, but what about lasting success? That kind of success comes with the contribution of ourselves, our time and effort to society, which means volunteering to build a better community,” she said. “We will only be respected and remembered not for what we do for ourselves, but for what we do for others.”

She encouraged grads to consider success in all aspects of their lives, from their careers and community service, to lifelong learning and a continued exploration of their interests.