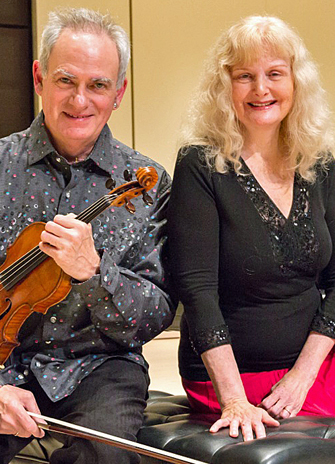 The duo performed the entire collection of 28 sonatas in an all-day concert marathon last May at Toronto’s Gallery 345. The enthusiastic audience response has inspired them to reprise the feat in a series of five performances at York’s Keele campus. The evening showcase concert on Thursday, Oct. 23, is the first instalment, to be followed by four midday “spotlight” performances over the next months.

Wolfgang Amadeus Mozart (1756-91) began writing his sonatas for violin and piano at the age of seven, publishing the first in 1764 and the last in 1788. These intimate chamber compositions exude the richness and beauty of the composer’s art as it developed over his lifetime.

“The earlier sonatas are generally simpler,” said Israelievitch. “As Mozart honed his craft, they evolve into works of greater complexity and depth.”

Israelievitch and Petrowska Quilico will present sonatas from the later period in their Faculty Concert, taking place at 7:30pm in the Tribute Communities Recital Hall, Accolade East Building. Admission is $15 for the general public and $10 for students and seniors. For ticket information, contact the Box Office online or call 416-736-5888.

An internationally acclaimed violinist, Israelievitch served as concertmaster of the Toronto Symphony Orchestra for two decades before joining York University’s Department of Music in 2008. He has performed chamber works with such luminaries as Emanuel Ax, Yefim Bronfman and Yo-Yo Ma, and appears regularly as part of the Israelievitch Duo with his son, percussionist Michael Israelievitch, and with the Naumburg Award-winning New Arts Trio. His extensive discography includes the Juno-nominated Suite Hebraique with pianist John Greer and the first complete recording of Kreutzer’s 42 Etudes for solo violin. The Toronto Musicians’ Association presented him with its Lifetime Achievement Award in 2008 in recognition of his distinguished contribution to the performing arts in Canada.

One of Canada’s foremost pianists and a multiple Juno nominee, Petrowska Quilico has appeared in solo recitals, chamber settings and with orchestras on four continents. Widely recognized as an innovative and adventurous artist, she is a longtime champion of contemporary and Canadian music, and has premiered more than 100 works by leading North American and European composers. She was chosen as one of 20 Can’t-Miss Classical Pianists of 2014 by CBC Music, placing her in a shared spotlight with some of the world’s most celebrated pianists. Her more than 30 recordings, spanning three centuries of music, have garnered accolades from critics and audiences alike. She has been professor of piano performance and musicology at York since 1987.