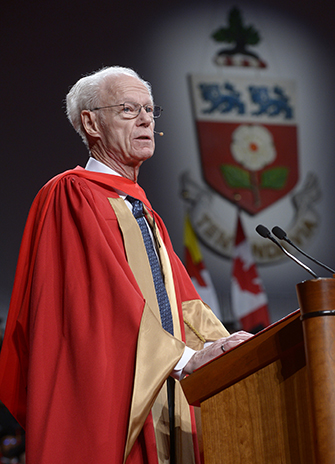 Renowned Canadian physicist Allan Carswell urged a diverse group of graduands to embrace with serendipity the unexpected in their careers and lives.

Carswell spoke to graduands of the Faculties of Graduate Studies, Education, Environmental Studies, Fine Arts and Science; Lassonde School of Engineering; Osgoode Hall Law School and the Schulich School of Business at the first ceremony of Fall Convocation after receiving an honorary doctor of science degree from York University.

An international leader in the field of laser-imaging technology (lidar) and the development of related space instrumentation, Carswell is the founder of Optech, a world leader in lidar and related technologies. He has received numerous awards for his achievements in entrepreneurship, research and development, innovation, photonics and space science, and has authored more than 200 scientific and technical publications. A professor emeritus of York University’s Department of Physics and Astronomy in the Faculty of Science, he was named a member of the Order of Canada in 2005, and is an active community leader and philanthropist.

“My career has been dominated by surprises and unexpected opportunities,” said Carswell. “I had no idea when I graduated that I would become a laser and lidar expert, a York professor, build a highly successful business and lead the first Canadian science mission on Mars.”

“My own career was full of surprises with a good measure of serendipity,” he said.

After completing his PhD in physics and a Post-Doctoral Fellowship in Holland, Carswell was anxious to find permanent work and accepted an offer from the Plasma Physics Laboratory at RCA Victor in Montreal. “Plasmas are ionized gases and I knew nothing about plasma but interest in the field was high because of the potential for energy generation from plasma fusion,” he chuckled. “When I arrived at RCA in May of 1961 it was just a few months after researchers had invented the first lasers. One of these was the helium-neon ionized gas laser. The wise folks at RCA recognized the potential importance of this new ‘plasma’ laser and since I was a new boy with time available they assigned me to start a laser study.”

This unexpected turn of events launched Carswell on a lifetime laser career that still continues after 54 years. “I never had any prior experience with lasers since when I finished my PhD studies the word ‘laser did not even exist, and my entry into the world of lasers was certainly ‘a fortuitous happenstance’,” Carswell told graduands.

His second major encounter with serendipity came seven years later in 1968 and brought Carswell to York University. A personal situation necessitated that he move with his family to Toronto and accepted a position in York University’s fledgling Faculty of Science. “The word at the time was that York was to be a liberal arts school,” he said. “Thus the existence of a science faculty at York was unexpected news. Moreover I was expected to initiate a graduate research program and there was nothing going on at York in my expertise areas of plasmas, microwaves or lasers. However research at York had great strengths in atmospheric science so I again moved into unknown territory by deciding to collaborate with this work by initiating research using lidar for studies of the atmosphere.”

The research involved sending pulsed laser beams into the atmosphere and studying the reflected signal to derive information on its chemical and physical properties. “Lidar was a very new research field and a totally new venture for me,” he said. “This hesitant step into a new field was again a most ‘happy accident’. The infant lidar field of that time is today producing world-wide revolutionary advances in 3D imagery and surveying.”

The early lidar work at York was for meteorology and air quality applications and Ontario Hydro was an early supporter of several lidar field studies, said Carswell. The technology at York University could “see” the invisible smoke plume and accurately track its density and location to assess its impact on the surrounding environment. This in turn led to the need for a lidar for Ontario Hydro, inspiring Carswell to start Optech as a private company to present a proposal to build the technology.

Optech won the proposal and Carswell rented off-campus space, hired a former York colleague and one of his PhD graduates. The company built and delivered the lidar. “From that tiny start in 1974 Optech has grown over 40 years to be the world leader in the development and manufacture of advanced lidar equipment with systems on all seven continents, in orbit and on the surface of Mars,” he said. “I attribute Optech’s success in no small measure to my environment at York. Long before the current emphasis on innovation and entrepreneurship, York has been providing outstanding support for such activities through its great strengths in business and law as well as engineering, natural and social sciences.”

The key to his lifetime of success in understanding and reacting to the opportunities presented by the unexpected turns of his life is serenity, said Carswell, this he says gave him the patience to critically assess a situation and take time for careful consideration before forging ahead.

“During your lifetime you will surely encounter many things that you cannot change,” he said in closing. “These situations are always difficult and do require the serenity and careful assessment before deciding the way ahead. But doing nothing is not an option. You have to have the courage and the wisdom to proceed.”