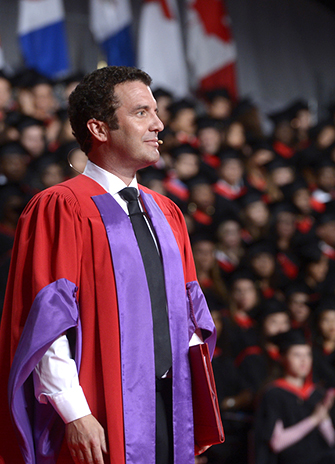 Award-winning comedian Rick Mercer encouraged Faculty of Health and Glendon College graduands to throw their plans for their futures away, or at least, consider doing so sometimes.

Mercer spoke at the second ceremony of Fall Convocation having received an honorary doctor of laws degree from York University.

“I know for a fact that for many of you to get here you had to have a plan. Plans are important. I love a good plan,” he said. “But…the people that I’ve met in my life, the people who have the most interesting lives, most satisfying careers, they have certainly at certain points in their lives, thrown the plan away.”

The winner of more than 25 Gemini Awards and known for his work on CBC TV’s This Hour Has 22 Minutes and The Rick Mercer Report, Mercer said he sees the best laid plans run amok at every single desk in his office.

The producer for his show, who Mercer says has “the best instincts for producing television, I think, in the country”, has a history degree. “Somehow along the line, his obsession with the battles that led up to the war of 1812, they’ve helped him to produce satire. I don’t know why, but he threw out the plan. And I encourage you to do that, to think outside the box. And geographically, think outside the box.”

He encouraged the grads to travel, to work in far flung corners of Canada. “One of the great thrills of my career is that I’ve been able to travel all across this country. I’ve got to go to places most people have never been. And I wish everyone could do that. I know that if you could see the country like I have then would love it so much more and fight for what you believe in,” he said.

As health care graduates, Mercer said travelling for work to various places in the country may be more doable than for others.

“I would encourage you to consider going north, I would encourage you to consider rural Newfoundland, I would consider rural anywhere. I would consider that fact that the places we hear about in Canada, which we are often told are in dire need of health care, are some of the most fascinating places on earth filled with some of the best people on earth. If you go there you may not get the cappuccino you want, but you may find out you love moose meat or caribou.”

Mercer’s mother worked in nursing and his sister has spent her professional life care in health care, mostly in adolescent mental health. “I’m very familiar with the fact that for many people health care is not just an occupation, it is in fact a calling. And that’s good. That’s a good thing because it’s very difficult work.”

Although he was quick to point out that the benefits in show business are much better. The show biz person is more likely to get bumped up into first class at the airport, whereas someone like his sister, who works with the chronically ill psychiatric homeless, well, not so much, said Mercer. Being in show biz, having your own comedy show, has other perks as well. In Mercer’s case, it led to him receiving an honorary degree.

In his sage words of advice to the graduates, Mercer told them to always show up on time – professionally and personally. Get involved and change things. And “always remember we’re some of the luckiest people on earth. We live in a wonderful country, but it is your job, it is your responsibility to make it better….Now please go out and fix my country.”