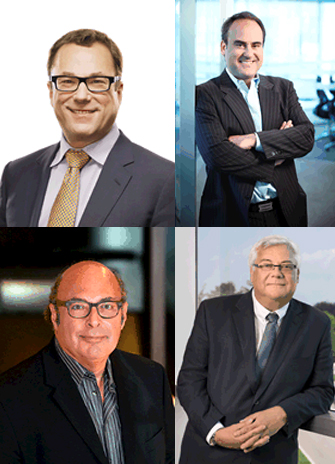 “I am very proud of this year’s recipients of Schulich’s Alumni Recognition Awards and I congratulate them on their tremendous achievements and contributions to the business world,” said Schulich Dean Dezsö J. Horváth. “These accomplished individuals are in good company, following in the path of a long line of Schulich alumni who have gone on to become leaders in the business world and in their communities in Canada and around the globe.”

The awards will be presented Oct. 16 at an annual gala dinner in the Schulich Executive Dining Room at the Keele campus. Paul Alofs (MBA ’83), president and CEO of the Princess Margaret Hospital Foundation, will be the master of ceremonies.

Outstanding Executive Leadership Award
Michael Cooper is the founder and chief executive officer of Dream Unlimited Corp (Dream), a real estate development, investment and management company with approximately $13 billion of assets under management. Cooper’s extensive track record in the real estate industry dates back to 1986, including an instrumental role in founding Dundee Realty Corporation, the predecessor of Dream, in 1996. Under his leadership, the business has grown to be a leader in commercial real estate, residential development and homes, and alternative energy infrastructure.


About John Ruffolo, 2014 recipient
Outstanding Progress & Achievement Award
John Ruffolo is the chief executive officer of OMERS Ventures, the venture arm of OMERS. OMERS Ventures invests in early- to late-stage companies in the technology, media and telecommunications sectors. In addition, he is also the executive managing director of OMERS Strategic Investments.

Ruffolo serves as board chair of MMM Group Ltd., and is a board member at HootSuite. He is chair of Canada’s Venture Capital and Private Equity Association’s government relations committee and a member of its executive committee. He also serves as a board member and committee chair at numerous other organizations, including: OneEleven, Communitech, the Next Big Thing Foundation and the Art Gallery of Ontario. In addition, he is the vice-chair of the David Suzuki Foundation and a member of the Toronto chapter of the Young Presidents’ Organization.

Prior to joining OMERS Ventures, Ruffolo was a partner at Deloitte, as well as the global yhought leader, the global tax Llader and the Canadian industry leader for Deloitte’s Technology, Media and Telecommunications (TMT) practice. He was also a member of the firm’s Tax and TMT Global Leadership teams and a member of Deloitte’s Board of Directors.

A chartered accountant, Ruffolo was formerly a partner with Arthur Andersen LLP and has also served as an instructor for both the Canadian Institute of Chartered Accountants and the Schulich School of Business.


About J. Mark Lievonen, 2014 recipient
Outstanding Public Contribution Award
Mark Lievonen is president of Sanofi Pasteur Limited, the Canadian vaccine division of Sanofi. Under his leadership, Sanofi Pasteur has become a billion-dollar enterprise in Canada, manufacturing over 50 million doses of vaccines for both domestic and international markets.

Lievonen is also a director of Oncolytics Biotech Inc.; chair of Canada’s Research-Based Pharmaceutical Companies (Rx&D); vice-chair of the Ontario Institute for Cancer Research; and serves on the boards of the Public Policy Forum, BIOTECanada and the Markham Stouffville Hospital Foundation.

A co-chair of the Ontario-Quebec Private Sector Advisory Committee, Lievonen was a member of the Ontario Investment and Trade Advisory Council, the BIOCouncil and the Toronto Mayor’s Economic Competitiveness Advisory Committee. He served as a member of the United Way of Greater Toronto cabinet, chairing the health-care division. He is a chartered accountant and received his designation while working with PricewaterhouseCoopers.

In 2002, Lievonen was the recipient of a Queen’s Golden Jubilee Medallion. He was named a Chevalier de l’Ordre National de Mérite by the government of France in 2007 and received the Queen Elizabeth II Diamond Jubilee Medal in 2012. He was elected a Fellow of the Institute of Chartered Accountants of Ontario in 2009 and was inducted into the Canadian Healthcare Marketing Hall of Fame in 2013. In 2014, Lievonen received the Life Sciences Ontario Lifetime Achievement Award.

About Howard Lichtman, 2014 recipient
Outstanding Contribution to the Schulich School of Business
Howard Lichtman has served for a number of years as co-chair, chair and program chair of CONNECT, Schulich’s annual alumni forum. He is a member of the Devil’s Advocate Panel for Schulich’s Global Management Program and a Senior Council Member on the Schulich Toronto Alumni Chapter. Lichtman has also served as a mentor for a number of Schulich MBA students over the years and has hired 18 Schulich graduates as interns.

He is president of The Lightning Group and co-founder of Ethnicity Multicultural Marketing and Advertising. The Lightning Group finds “paths to new revenue” and provides virtual chief marketing officer services and strategic guidance to blue-chip clients ranging from the Ottawa Senators and the Royal Conservatory of Music to Holland Bloorview Rehabilitation Hospital and Taste of the Danforth. Ethnicity is a multicultural marketing and advertising firm dedicated to helping companies drive growth by engaging ethnic consumers.

Prior to founding The Lightning Group, Lichtman was executive vice-president of marketing and communications at Cineplex. His responsibilities included marketing, promotions, sponsorships, public relations, as well as investor and media relations. Lichtman designed a number of innovative, enduring business-building programs that have become industry standards, including on-screen advertising, in-theatre sampling, popcorn bag advertising and the American Express “Front of the Line” program. While at Cineplex, he also managed an in-house advertising agency on behalf of both Cineplex and a number of the major Hollywood studios.

Lichtman has served on several non-profit boards, including the Ontario Science Centre and the United Jewish Appeal Federation.