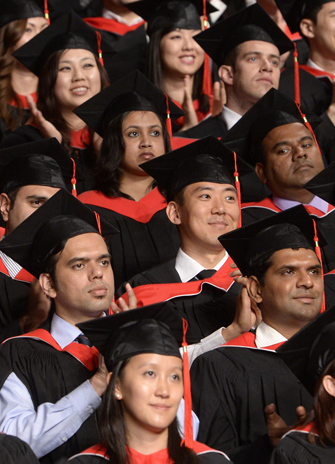 Classrooms to Careers is open to current students and new grads.

York University will confer honorary degrees at fall convocation ceremonies to an exceptional group of Canadians, including an internationally recognized scientist, a top political satirist, an academic leader who champions the value of university education, a trailblazing bank executive, and a fashion entrepreneur who became a Canadian senator.

“Each of these individuals has demonstrated dedication not only to their profession, but to their community,” said York University President and Vice-Chancellor Mamdouh Shoukri. “They exemplify York’s commitment to the values of social justice and service to society, and are inspiring role models for our graduates.”

Convocation ceremonies will be held Oct. 15 to 17. Here are the recipients in order of the Faculty ceremonies at which they will be honoured:

Carswell is an international leader in the field of laser-imaging technology (lidar) and the development of related space instrumentation. Founder of Optech, a world leader in lidar and related technologies, he has received numerous awards for his achievements in entrepreneurship, research and development, innovation, photonics and space science, and has authored more than 200 scientific and technical publications. A professor emeritus of York University’s Department of Physics and Astronomy, Faculty of Science, he was named a member of the Order of Canada in 2005, and is an active community leader and philanthropist.

Best known for his work on CBC TV’s This Hour Has 22 Minutes and The Rick Mercer Report, Mercer has been described as the Canadian Parliament’s “unofficial opposition.” He has received more than 25 Gemini Awards for his work on television, co-founded the Spread the Net campaign to help prevent malaria in Africa, and is an outspoken supporter of the It Gets Better Project for lesbian, gay, bisexual and transgender youth who suffer harassment and bullying. He was named an officer of the Order of Canada in 2014.

As the first Canadian of Asian descent to be appointed to the Senate of Canada from 1998 to 2012, Poy championed many initiatives, including Asian Heritage Month. She served as chancellor of the University of Toronto from 2003 to 2006, and prior to that founded and very successfully operated the fashion design company Vivienne Poy Mode. She did graduate studies at the former University of Toronto-York University Joint Centre for Asia Pacific Studies, now York Centre for Asian Research, and recently established the Vivienne Poy Asian Research Award at York, enabling students to embark on fieldwork in Asia.

Bonnie Patterson – Academic leader, professor, mentor
Honorary Doctor of Laws
Faculty of Liberal Arts & Professional Studies
Thursday, Oct. 16, 3:30pm
Patterson, who is serving her second term as president and CEO of the Council of Ontario Universities (COU), is known for her patience, persistence and poise in addressing challenges facing Ontario universities and the postsecondary system as a whole. She served for 11 years as president and vice-chancellor of Trent University, which emerged as a research leader in the province under her leadership. She was appointed to the Order of Ontario and as a member of the Order of Canada in 2010.

Taylor is the first woman in Canadian history to lead the board of a major bank. Currently Chair of the Board of Royal Bank of Canada, this distinguished York University alumna was formerly president and CEO of Four Seasons Hotels and Resorts. Her many accolades for business achievements include the Schulich School of Business Award for Outstanding Executive Leadership and the inaugural Medal for Career Achievement from the Hennick Centre for Business and Law at York. She has been inducted into the Canadian Marketing Hall of Legends and is active in community initiatives.