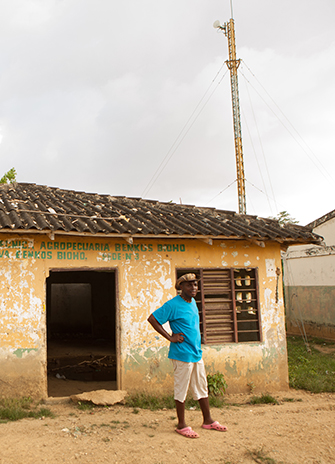 When York University grad student Alexandra Gelis and her mother Cristina Lombana stumbled across the remnants of the first radio station in San Basilio de Palenque, Colombia, there was little more than a broken sound card, a wobbly microphone stand and pieces of an oxide transmitter.

The house that held the radio station, and where the resonant voice of the former announcer Manuel Pérez was once heard across the airwaves, was in a shambles. The loss it represented to the community struck a chord with the two women. This was a town where Gelis had spent much of her time as a child, and Lombana had worked in radio previously. “My mother is one of the women pioneers of radio in the Caribbean region of Colombia,” says Gelis.

So although Gelis was there to research non-native plants in South America – in particular those plants that were used as biopolitical techniques to transform territories and communities, as part of her doctoral studies in York University’s Faculty of Environmental Studies (FES) – the community building potential of local radio pulled at her.

San Basilio de Palenque was named by UNESCO in 2005 as Masterpieces of the Oral and Intangible Heritage of Humanity. But who was going to keep the oral traditions and heritage alive?

As Gelis says, “Palenque needs a radio station to help preserve and disseminate its rich oral and musical traditions.” So Gelis and her mother embarked on a mission to get the community radio station they called Aloito Pio fully operating once again. To do that, of course, would require funding.

And that is where FES PhD students Julie Chamberlain and Erica Gajewski, and FES Professor Deborah Barndt, come in. During their summer break, the FES trio participated in a triathlon relay with the goal of raising funds for Aloito Pio. York Professor John Greyson also competed in the event.

“Aloito Pio is a wonderful community radio station in Palenque, Colombia, a collaborative effort of artist Alexandra Gelis, a York PhD student, her mother and others,” says Barndt. “Inhabited mainly by African Colombians, Palenque is considered the first free town in America, the only surviving community of several villages founded by escaped slaves as a refuge in the 17th century.”

The radio station will help keep the culture of African descendants alive. “Its current 3,500 inhabitants still preserve cultural practices from their African ancestors and the internet-based radio is a critical tool for honouring the past and present histories, struggles and celebrations of the people,” says Barndt.

The FES trio boarded an early morning ferry to the Toronto Islands to join 650 other swimmers, bikers and runners. There they were branded – on their arms with their team number, 313; and on their calves with their ages.

Despite the water temperature of Lake Ontario coming in at a chilly 13 degrees, Chamberlain donned her wetsuit and braved the cold north shore waters, swimming 375 metres in nine and a half minutes. Then it was Barndt’s turn. Hopping on her bicycle, she sped off on a 20-kilometre ride back and forth twice across the islands.

“I had injured my knee a few days earlier and was nervous about riding alongside other bikes on a crowded path,” says Barndt. “But the bikes were spread out, and I did my best time yet – 45 and a half minutes. It was actually a beautiful ride, the sun streaming through the trees.”

Gajewski finished the triathlon relay with the five-kilometre run at 24 and a half minutes. She was congratulated by FES colleague John Vainstein. Barndt’s son Joshua was also on hand to document the day and provide emotional support.

Their efforts raised $1,000. On her next trip to Palenque, Gelis will bring the photos of the triathlon as well as a cheque. “The community in Palenque is very excited with the FES initiatives,” she says. In turn, she will record a short video of the community’s response when presented with the FES donation.

“With the money raised by the FES team, Aloito Pio community radio will soundproof a small room in the House of Palenque’s Knowledge, a temporary location, pay Internet fees and buy small transmitter,” says Gelis.

Already, several workshops on recording and producing radio programs have been held in Palenque with the support of the community and local organizations. Several shows have also been recorded on traditional children’s songs used in games, traditional ritual and funeral music, chants and beliefs, as well as traditional medicine and cooking.

The ultimate goal is to build a permanent station, but for now, Gelis says the immediate priority is to get an antenna, a couple of computers, microphones, recorders, a small mixer and other basic supplies and cables – items necessary to transmit the station’s first program.