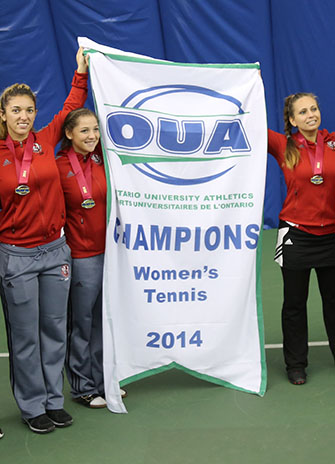 The banner is the team’s first since the Lions won three in a row from 2001-03, and their sixth overall in program history. They won with 17 points, four more than second-place Montreal.

The Lions dominated the three-day tournament en route to the title, winning three of the six singles flights and one of the three doubles. Overall, they had five women competing in singles final rounds on Day 3.

Valerie Ushanova claimed the singles gold medal in the top flight for the second time in her career, adding it to the title she won in 2012 and the silver from last season. She did not drop a set in three matches and claimed the gold by defeating Steffi Wong of the University of Toronto Varsity Blues 7-5, 6-4. She nearly claimed another gold medal on the day in doubles alongside Julia Kedryzcki, but ultimately fell to U of T’s Wong and Jenny Cape.

Also winning their singles flights were rookie Eugenie Lim Ah Tock and Sonia Glushkovsky. Lim Ah Tock dominated the third flight, winning each match in straight sets including the final by a score of 6-2, 6-1 over U of T’s Antonina Gorshenina. Glushkovsky, a finalist in the fifth flight last year, won the sixth flight by defeating Lauriane Roussel of the University of Montreal Carabins in a thriller, 6-3, 3-6, 6-4.

Kelsi Smith and Shivanie Skandarajah played in the fourth and fifth flight finals, respectively, but were each defeated in three sets.

On the men’s side, the host Western University Mustangs won their third straight OUA championship with 15.5 points. The Lions finished seventh with 0.5 points, earned by Pranav Yardi and Fernando Pirela in the third doubles flight, where they reached the semifinals.