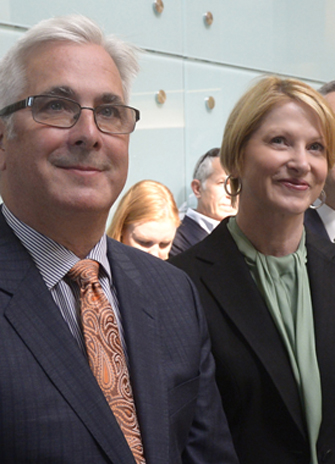 On Sept. 29, York University announced that Doug and Sandra Bergeron have increased their support of the Lassonde School of Engineering to a record-breaking $10-million. In recognition of this exceptional and continued support from the Bergeron family, the school’s new home will be named the Bergeron Centre for Engineering Excellence.

The donation from Doug Bergeron, who graduated from York in 1983 with a degree in Computer Science, and his wife Sandra, is the largest ever to York University by an alumnus. “We are extremely grateful to Doug and Sandra Bergeron for this tremendous commitment, which will help to shape York University’s future,” said President and Vice-Chancellor Mamdouh Shoukri. “This gift is particularly special to York because it will be used to encourage the type of entrepreneurial spirit that Doug, one of our own graduates, has demonstrated so often as a business leader.”

Doug and Sandra Bergeron – both Silicon Valley entrepreneurs – previously committed $2-million to create the Bergeron Entrepreneurs in Science & Technology program (known as BEST) at York in 2012. This additional $8-million gift will go towards the Lassonde School of Engineering’s brand new home at York University’s Keele campus, opening in summer 2015.

Speaking at the Sept. 29 ceremony in Osgoode Hall Law School’s Ignat Kaneff Building, Doug Bergeron, founder and CEO of Opus Global, said, “we want Canada’s most promising engineers and entrepreneurs to thrive, to innovate, and to eventually change the world.”

“This bold new home for engineering at York University defies conventional wisdom and gives students the opportunity to learn in ways that were unthinkable before the dawn of the information age,” Bergeron continued. “Representing a free-flow of ideas, this building reflects the vision of York University and is primed to become Canada’s most advanced engineering facility. I’m very proud to call this my new home.”

The five-storey, 167,500 square-foot Bergeron Centre for Engineering Excellence won’t offer a typical engineering school experience. The space has been designed to “flip the classroom” so that students will watch lectures online at home or in a café, and come to campus for active learning sessions with professors, classmates and mentors.

“This support will give our students the opportunity to explore their passions and gain new perspectives in a home that’s completely different to any engineering school ever built in Canada.”

This could not be truer for current Lassonde student and chair of the Lassonde Student Council Manjeet Kaur, who was invited to speak at the ceremony. “On behalf of all our students, I want to thank Doug and Sandra Bergeron. With their continued support, generations of future Lassondians will be inspired to become successful entrepreneurs of tomorrow.”