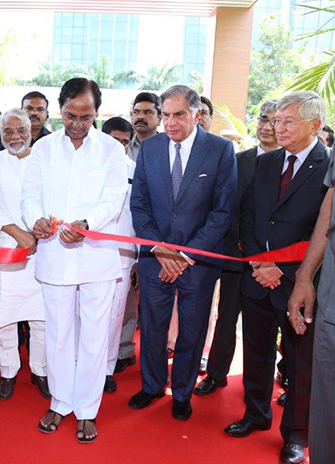 The new Hyderabad campus for the Schulich School of Business MBA in India program officially opened its doors on Sept. 26, the latest step in the Schulich’s pioneering commitment to become one of the world’s leading transnational business schools.

The high-tech campus, which features a videoconferencing link to Schulich’s Toronto campus, is part of a recent twinning arrangement between York University’s Schulich School of Business and GMR School of Business, an educational initiative of GMR Varalakshmi Foundation of the GMR Group, India’s leading infrastructure enterprise.

The 20,000-square-foot facility and grounds are near the airport in Hyderabad, India’s fourth-largest city and home to thriving financial services, IT, manufacturing and pharmaceutical sectors. The Hyderabad facility has space to significantly expand the size of Schulich’s MBA in India program in future years.

At the opening ceremony, attended by York University President and Vice-Chancellor Mamdouh Shoukri and several Indian and Canadian dignitaries, Dean Dezsö J. Horváth pointed out that the Schulich School of Business’ ties to India stretch back more than 20 years, with the initiation of exchange partner agreements with a number of India’s leading management schools during the early 1990s.

“This new Hyderabad facility, developed through our partnership with GMR School of Business, will help us extend our global footprint in one of the world’s major markets,” Horváth said. “We are delighted to be expanding our global footprint here, in a region of India that is fast becoming one of the new hubs of the 21st century global economy.”

“Internationalization is a strategic priority for York University,” said Shoukri. “As exemplified by the opening of this new campus in Hyderabad, the Schulich School of Business continues to be a pioneer in international activities and outreach. This is an exciting moment for Schulich, the University, our partners in India and our students, and a significant advance in the school’s impressive and ongoing efforts to expand its global presence.”

Since 2005, the school has operated a satellite centre in Mumbai. In 2009, Schulich became the first major, top-ranked international business school to deliver an MBA program in India, in partnership with the SP Jain Institute of Management and Research in Mumbai. So far, three cohorts have graduated through the Schulich MBA in India program, which launched in January 2010.

“We’re proud of the fact that since first launching the Schulich MBA in India program in 2010, close to 120 graduates are now pursuing successful business careers in Canada, India and around the world,” said Ashwin Joshi, executive director of the Schulich MBA in India program and Schulich professor of marketing. “We are developing global managers who are able to take their business skills to any country in the world.”

Rao, who is also chair of the India Advisory Council, expressed pride in the GMR Varalakshmi Foundation’s association with the Schulich School of Business.

“The establishment of Schulich School of Business [in Hyderabad] heralds the take-off of a new chapter in management education in India,” said Rao. “I am confident that the school will provide top-class management education to the students…. I wish the first batch of students good luck.”

There are close to 50 students starting the two-year MBA in India program at the new Hyderabad campus, and more than 30 students in the program are now completing their final year at Schulich’s Toronto campus. (Students in the program complete year one in India and year two in Canada.) The program has received government accreditation through the All India Council for Technical Education.

James McKellar, a former architect and director of Schulich’s Real Estate and Infrastructure program, worked with the local community to create the design for the fully renovated building. It includes a library/resource centre that virtually accesses the Peter F. Bronfman Business Library at Schulich in Toronto, creating the largest database of any business school in India; a tiered classroom with seating for up to 55 students and four break-out rooms; a lounge/dining room that can be converted into a large classroom; and a board room, reception area and administrative offices.

In addition, advanced IT and AV capabilities, including a videoconferencing link to Schulich’s Toronto campus, have been installed. Other features include an outdoor dining terrace and a covered parking lot. The building is clad with a bamboo-like screen to help neutralize Hyderabad’s semi-arid hot climate. All construction work was undertaken by GMR on behalf of Schulich.