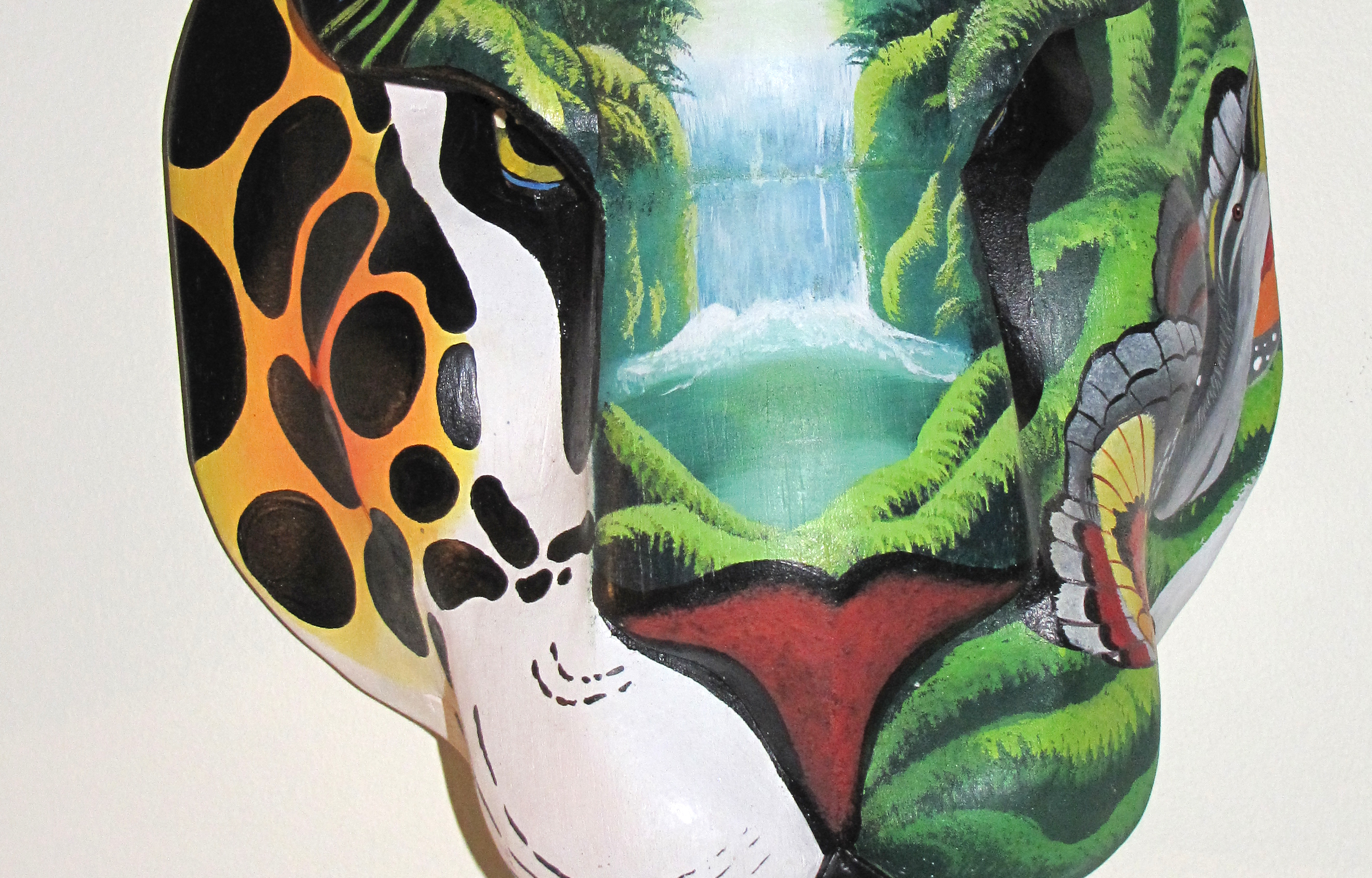 Hybrids of forest creatures and humans leap out from an exhibition of masks at the Xroads/Crossroads, a lively new multipurpose space for interdisciplinary and community-based arts in the Faculty of Environmental Studies. The In the Mask of the Boruca exhibit focuses on the art of indigenous communities linked to Las Nubes, a rainforest in Costa Rica donated to the Faculty of Environmental Studies at York University.

The exhibition features masks made by Boruca artists and donated by students from the 2014 annual Costa Rica Field Experience course and is curated by Charmaine Lurch and Vero Diaz, visual artists and Master in Environmental Studies (MES) students. It tells an important story about the culture of the indigenous people in that country. The exhibit runs until Sept. 26 at 283 Health, Nursing and Environmental Studies Building, Keele campus.

As Lurch explains, “A long time ago, the indigenous groups had to fight off the Spaniards … They used to dress up in their masks … They chased them out with their masks and they wore a burlap cover, much like a lot of indigenous people from around the world …” A testament to the value of cultural preservation, the ancestors were painted on some of the masks and the youth were also taught the intricate art of mask-making.

Together with a talk by Jamaican and Canadian multidisciplinary artist Charles Campbell, former chief curator of the National Gallery of Jamaica, In the Mask of the Boruca kicked off the 2014-15 season at Xroads/Crossroads.

In his talk last Thursday, Campbell also tackled issues related to decolonization, urban environmental art and the politics of community. Asking what it might mean to debunk Eurocentric notions of arts institutions, he led his audience on the journey toward his exhibition Anything with Nothing: Art from the Streets of Urban Jamaica, which brought street artists into the National Gallery of Jamaica for the first time. Central to Campbell’s work are themes of decolonization, racialization and the ways in which these issues must be negotiated by the curator working with artists outside formal art structures.

Campbell’s inspiration for his craft involves confronting problems of inequity and difficult situations arising from post-colonial legacies in urban space. His strategy? “Finding a way to contend with those [problems] in a fashion that doesn’t perpetuate them … but allows the possibility of changing something.” In the conflicted urban context of Kingston, Jamaica, this meant opening up a national arts institution to popular artists in ways that confronted Eurocentric inheritances and questioned the boundaries of class and race that mark Jamaica’s urban environment.

Campbell collaborated with York Professor Honor Ford-Smith, coordinator of the Community Arts Practice Certificate at York whose research, sponsored by the Social Sciences and Humanities Research Council of Canada, examines memorial street art as a venue for struggles against state and other forms of violence in the city of Kingston. Ford-Smith’s project, Memory, Urban Violence and Performance in Jamaican Communities, investigates “how people in different social and spatial locations remember and forget the losses inflicted by urban violence.” It explores the ways in which representations of conflicting memories of terror and love mobilize and silence conceptions of social justice in the context of the present geopolitical moment.

Anique Jordan, an MES student who worked with Ford-Smith and whose research focuses on art and community survival of Africans in the diaspora, notes that Anything with Nothing is “urgent and politically pressing as it becomes a platform for artists from inner-city Jamaica to exhibit work that is relevant and representative of themselves and communities.”

Xroads/Crossroads is a space where multidisciplinary conversations can take place in the language of environmental and community-based art and performance. It is so named because that is where different worlds can come into contact, where questions of social justice can be encountered and where both undergraduate students in the Community Arts Practice Certificate and graduate students in art, performance and the politics of the environment can create and share work that appeals to audiences outside traditional arts institutions. It is wheelchair accessible and showcases experimental exhibitions and performances, workshops, discussions and research presentations. The space serves all students, faculty and community-based partners whose work addresses environmental art, performance and politics.

See the Xroads/Crossroads Fall lineup below:

Sept. 25 to Oct. 16 – Arts-Based Research Workshop – Series focusing on how to do research through visual arts approaches by Sarah Switzer.

Oct. 8 – Sitting with Death – One woman’s reflection on the eight months she sat by her mother’s side as she transitioned from life to death in a palliative care unit in Toronto. Performed by Natalie Abdou.

Nov 3 to 14 – Invoking the Goddess – Focusing on Hindu/Buddhist transculturation in the post-Civil War context, this photography exhibit is co-sponsored by the Centre for Feminist Research and curated by leading Sri Lankan scholar Mala de Alwis.

Nov 16 to 25 – Cane – A portrait and conversation on intimate legacies of Asian indentureship and migrant labour by Andil Gosine.