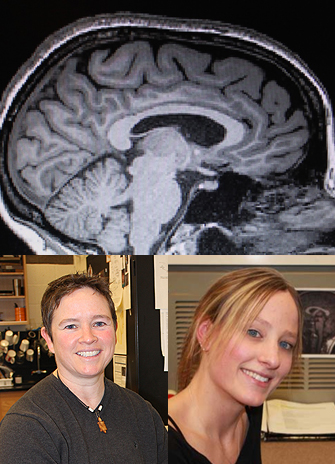 Before there are any telltale behavioural signs of dementia, a simple test that combines thinking and movement could point to those with a heightened risk of developing Alzheimer’s disease and who are already having visuomotor difficulties, according to new research out of York University.

Study participants were given increasingly demanding visual-spatial and cognitive-motor tasks to see if the tests could tease out those who were having difficulty even though they were not showing outward signs of the disease. The participants were divided into three groups – those who had already been diagnosed with mild cognitive impairment (MCI) or had a family history of Alzheimer’s, and two control groups – young adults and older adults – without a family history of Alzheimer’s disease.

Sergio of York’s School of Kinesiology and Health Science in the Faculty of Health and PhD Candidate Kara Hawkins found that 81.8 per cent of the participants who had a family history of Alzheimer’s disease and those with MCI displayed difficulties on the most cognitively demanding visual motor task.

“The brain’s ability to take in visual and sensory information and transform that into physical movements requires communication between the parietal area at the back of the brain and the frontal regions,” says Sergio. “The impairments observed in the participants at increased risk of Alzheimer’s disease may reflect inherent brain alteration or early neuropathology, which is disrupting reciprocal brain communication between hippocampal, parietal and frontal brain regions.”

Detecting impairment to that communication may prove to be an early indication of those at risk for Alzheimer’s disease. A visual-spatial and cognitive-motor test that requires thinking and movement at the same time may help detect subtle changes associated with the disease before the usual cognitive-only tests do. Once Alzheimer’s is visibly noticeable in people’s behaviour there is already significant brain damage, says Hawkins.

Participants were required to complete four tasks on a dual-screen laptop computer. One such task involved moving a cursor in the opposite direction of a visual target on a touch screen, which required the person’s brain to think before and during their hand movements. This is where the most pronounced difference showed between the MCI and family history group and the two control groups.

Hawkins says the findings don’t predict who will develop Alzheimer’s disease, but they do show there is something different in the brains of most of the participants diagnosed with MCI or who had a family history of the disease.

“We know that really well-learned, stereotyped motor behaviours are preserved until very late in Alzheimer’s disease,” says Hawkins. These include routine movements, such as walking. The disruption in communication will be evident when movements require the person to think about what it is they are trying to do.

There has been little research into visuomotor impairment in those with MCI or Alzheimer’s. This study shows that there are measurable impairments in visuomotor control in those participants who are already at increased risk of developing the disease.