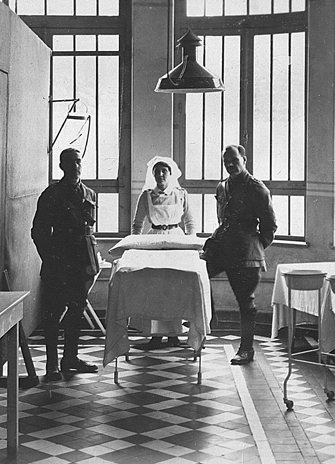 Two soldiers and a nurse, presumably serving with the Canadian Expeditionary Force, during the First World War.

Several thousand women around the world – including 2,504 from Canada – left their home countries for the first time to join the First World War as nurses. Did they take such bold steps to serve their country and express their patriotism, or with the hope of caring for their men in the combat zone? Or, did they find that nursing offered a passport to travel as free spirited and adventurous women of the day?

Historians from around the world are gathering at York University to reflect on this and other historic topics as part of a commemoration of the centenary of the First World War. The day-long conference, “The First World War: History, Memory and Commemoration” will take place Sept. 18 at the Keele campus. The conference has been organized jointly by York University’s Department of History in the Faculty of Liberal Arts & Professional Studies, the Avie Bennett Historica Canada Chair in Canadian History, and the Archives of Ontario.

“Speakers from Australia, Belgium, England, Portugal, the United States and from Canada will talk about the war experience overall, but in particular, the scholars will analyze how the war is being commemorated in countries around the world,” says Professor Marcel Martel, chair of the Avie Bennett Historica Canada Chair in Canadian History, and a lead organizer.

Margaret MacMillan, author of Paris 1919: Six Months That Changed the World, will offer the annual Avie Bennett Public Lecture – the highlight of the conference. In her presentation titled, “Canada and the Great War”, MacMillan will delve into the literary, aesthetic, critical, political and historical perspectives of Canada’s participation in the war.

The First World War: History, Memory and Commemoration conference will take place from 9am to 4:30pm in the Archives of Ontario, 134 Ian Macdonald Boulevard. MacMillan’s public lecture will take place from 7 to 8:45pm in Room 001, Accolade East Building. The lecture is free and open to the public.

For full program highlights and a complete schedule of presentations, visit the conference website.