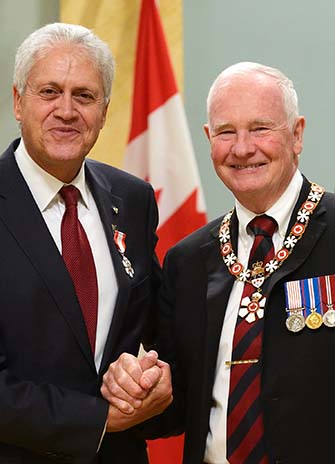 York University President and Vice-Chancellor Mamdouh Shoukri was invested as a member of the Order of Canada during a ceremony in Ottawa on Friday, Sept. 12. Governor General David Johnston, commander-in-chief of Canada, presided over the ceremony.

The ceremony took place at Rideau Hall, the official residence of the governor general of Canada. Shoukri was appointed a member of the Order of Canada in recognition of his contributions to “… the flourishing of Ontario’s academic institutions as an engineer, an academic and an administrator.”

“This distinction is exceptionally meaningful to me as someone who came to Canada 42 years ago to pursue my personal and professional aspirations,” said Shoukri. “Canada has provided me with abundant opportunities. Being invested as a member of the Order of Canada recognizes the achievements of my colleagues and students, and I am deeply grateful and honoured.”

The Order of Canada recognizes distinguished Canadians who have made significant contributions to Canadian society.

Paul Cantor, past chair of the Board of Governors of York University, was also inducted as a member of the Order of Canada during the Sept. 12 ceremony. Cantor was invested for “… his contributions to the Canadian financial sector and for his support of postsecondary education.”

Established in 1967 by Queen Elizabeth II, the Order of Canada is the cornerstone of the Canadian Honours System and recognizes outstanding achievement, dedication to the community and service to the nation. The order recognizes people in all sectors of Canadian society. Their contributions are varied, yet they have all enriched the lives of others and made a difference to this country. Since its creation, more than 6,000 people from all sectors of society have been invested into the order.