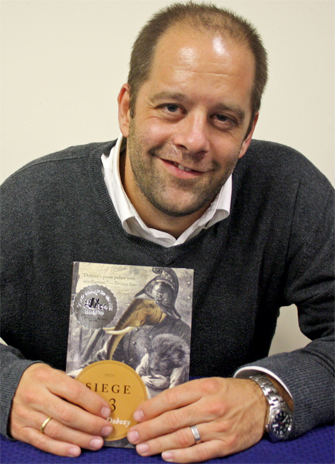 If you love hearing talented writers and poets talk about their work, or just want to hear them read from one of their latest books, don’t miss the opportunity to attend the Canadian Writers in Person reading series beginning tonight at York University.

Wilfrid Laurier Professor Tamas Dobozy will read from Siege 13, a collection of short stories centred on the military blockade of Budapest in the fall of 1944. During the siege, the Red Army encircled the city, trapping thousands of German and Hungarian troops, and nearly a million civilians. It was one of the fiercest events of the Second World War and was marked by guerrilla warfare, disease, starvation and inhumane acts of cruelty.

Dobozy’s book alternates between the events of the siege and Hungarian nationals who found refuge in the west.

The author of more than 50 works in journals such as Granta, Fiction and the Alaska Quarterly Review, Dobozy is the recipient of a 2011 PEN/O. Henry Prize for “The Restoration of the Villa Where Tíbor Kálmán Once Lived,” a story included in Siege 13. He was also awarded the inaugural Fulbright Research Chair in Creative Writing at New York University in 2009. Dobozy lives in Kitchener, Ont., and currently teaches in the Department of English and Film Studies at Wilfrid Laurier University.

The series features 11 Canadian authors who will present their work, respond to questions from the audience and sign books. In addition to tonight’s author, this year’s lineup features an eclectic mix of new and established writers:

All readings are part of a degree credit course on Canadian literary culture offered by the Culture & Expression Program in the Faculty of Liberal Arts & Professional Studies. You don’t have to enrol in the course to attend the readings. For more information, contact Professor Leslie Sanders at leslie@yorku.ca. All readings are held Tuesdays from 7 to 9pm in 206 Accolade West Building, Keele campus.