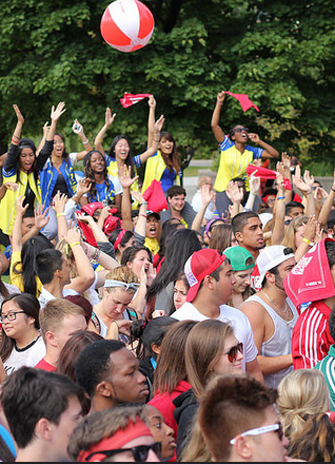 At a time of year when most of the world is settling down and preparing to slumber through the winter months, September marks the sudden coming-to-life of York’s campuses. Every summer it is easy to forget just how much energy and activity York University students contribute to campus life.

Last week, that energy swept through York’s Keele and Glendon campuses like a whirlwind. Where just two weeks earlier there was only the quiet buzz of a few students and faculty on campus for work, or to pick up their books early, Orientation Week (O-Week) arrived by storm and set the tone for what surely will be an energetic school year.

York U Orientation continued its longstanding tradition of assisting parents and new students as they moved their belongings into residence. On Monday, Sept. 1, as many cars packed to the roof with possessions pulled up to the Keele and Glendon residences, new students and their families didn’t have anything left to carry after York’s O-Week leaders arrived shouting welcomes and helping with moving the endless boxes, bags and books into York’s residences. The enthusiasm of these dedicated O-Week leaders reached heroic levels and didn’t drop for the entire week.

One of the highlights of 2014 Orientation Week was Making Connections Day at the Rexall Centre on Tuesday, Sept.2. This event is unique to York University and is intended to provide students with an easier transition to university life from high school, as well as give them a crash course in the importance of consent during the presentation portion of the day.

Making Connections was the culmination of YU START, a summer-long program that connects new students to senior students online and offers assistance with course selection and becoming familiar to the University. YU START offers new students a place to meet other classmates before they even set foot on campus. After a summer of anticipation, YU START students finally had the opportunity to meet with people they had been in touch with online during the summer months, including their professors and teaching assistants and York U staff.

At the Rexall Centre, first-year students and orientation leaders attended You Had Me at Consent, a talk designed to educate students about the importance of “enthusiastic consent” in all aspects of relationships. Keynote speakers Rachel Griffin and Joshua Phillips focused mainly on popular culture and its relation to sexual violence in their presentation, which encouraged students to treat others with dignity and respect, and to speak out when witnessing behaviour they feel is not appropriate for an inclusive and safe space.

Making Connections was the result of a pan-University collaboration involving the Office of the Vice-Provost Students, the Centre for Human Rights and Student Community and Leadership Development (SCLD). The York Federation of Students offered their support as well, providing students with important context for the event in their opening remarks as the event’s MCs. Thousands of first-year students attended.

There is never a dull moment during O-Week and the following day was no exception. Wednesday, Sept. 3 was academic orientation day for many colleges, and orientation leaders filled the gaps between sessions with campus tours, scavenger hunts and creative games. Many students shared photos of their academic orientations, where deans, department chairs and professors gave presentations to help prepare students for their first year of university.

Days four and five were packed primarily with social orientation events among colleges, with each college venturing off to Wasaga Beach for some end-of-summer fun in the sun. Another tradition among college orientations at York are downtown tours. O-Week leaders take their first-year students into the heart of downtown Toronto to introduce them to life in the city. This event is especially fun for students who attend school from outside the Greater Toronto Area, and for many of them it is their first opportunity to tour Toronto since moving into residence.

The second annual Lions’ Pride event was held at the Harry W. Arthurs Common on Saturday, Sept. 6. Once again, thousands of first-year students (now official frosh) took part in a parade, dancing to the drum beats of the York Samba Squad. At the common, they received an official welcome from representatives from the York Federation of Students, Vice-Provost Students Janet Morrison, President and Vice-Chancellor Mamdouh Shoukri and York basketball Lions Daniel Tulloch and Richard Iheadindu. The speakers challenged the first-year students to make the most of their University experience by getting involved. The rally also included a grand college cheer-off, exceptional performances by York’s hip-hop group Dark Dances and York’s a cappella group Wibi. Rally towels, T-shirts and beach balls were given out to participants.

Lions’ Pride was organized by SCLD, in collaboration with the 2014 members of the York Orientation Directors Association (YODA). Following Lions’ Pride, frosh participated in the Colour Run, organized by YODA. Once they were painted in red and charged with York spirit, they headed over to the York stadium to cheer on the Lions men’s football team as they took on the Western Mustangs. Spirit continued to be high throughout the Lions Frosh Frenzy Home Opener despite the Lions’ loss to the Western University Mustangs. The football game proved to be a great way to signal the beginning of the end of Orientation 2014.

Adding to the success of York’s Orientation Week, the University was featured on local and national news stations. Global News Toronto did a story on University Orientation Weeks and set the interviews on York’s Keele campus, while CBC’s “The National” covered York University’s roommate selection software in a story about how first-years’ choose their roommates.

Some say 2013 was the year of the selfie, but if O-Week was any indication, York might be carrying that tradition into the 2014-15 school year. Dozens of spirit-filled selfies were posted on social media last week, and many were taken with York’s president, who got into the O-Week spirit by taking his own Oscar selfie while on stage at the Making Connections event.

Orientation this year was like nothing this campus has ever seen before. Thanks to the efforts of the SCLD team, the York Federation of Students, the Centre for Human Rights, the RedZone, YODA and Vice-Provost Students Janet Morrison, campus-wide O-Week put more emphasis on York spirit than in years previous. Several incredible York-wide events were added to the O-Week lineup, including Making Connections and the Keele Carnival.