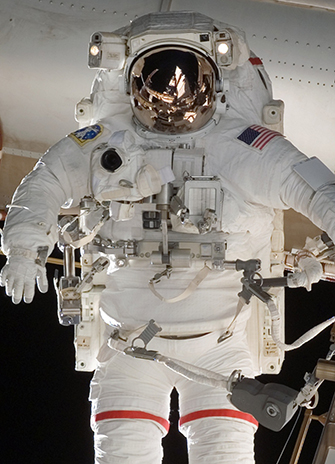 Keeping upright in a low-gravity environment is not easy, and NASA documents abound with examples of astronauts falling on the lunar surface.

Now, a new study by an international team of researchers led by York University Professors Laurence Harris and Michael Jenkin, published Sept. 3 in the journal PLOS ONE, suggests that the reason for all these moon mishaps might be because its gravity isn’t sufficient to provide astronauts with unambiguous information on which way is “up.”

“The perception of the relative orientation of oneself and the world is important not only to balance, but also for many other aspects of perception including recognizing faces and objects and predicting how objects are going to behave when dropped or thrown,” says Harris. “Misinterpreting which way is up can lead to perceptual errors and threaten balance if a person uses an incorrect reference point to stabilize themselves.”

Using a short-arm centrifuge provided by the European Space Agency, the international team simulated gravitational fields of different strengths and used a York-invented perceptual test to measure the effectiveness of gravity in determining the perception of up. The team found that the threshold level of gravity needed to just influence a person’s orientation judgement was about 15 per cent of the level found on Earth – very close to that on the moon.

The team also found that Martian gravity, at 38 per cent of that on Earth, should be sufficient for astronauts to orient themselves and maintain balance on any future manned missions to Mars.

“If the brain does not sense enough gravity to determine which way is up, astronauts may get disoriented, which can lead to errors like flipping switches the wrong way or moving the wrong way in an emergency,” says Jenkin. “Therefore, it’s crucial to understand how the direction of up is established and to establish the relative contribution of gravity to this direction before journeying to environments with gravity levels different to that of Earth.”

This work builds upon results obtained in long-duration microgravity by Harris and Jenkin and other members of York’s Centre for Vision Research while on board the International Space Station during the Bodies in the Space Environment Project, funded by the Canadian Space Agency.